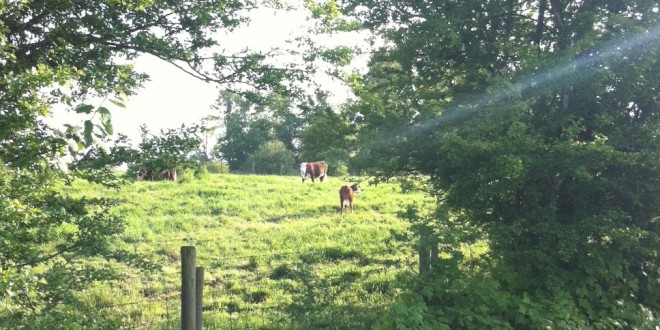 I have never thought of myself as a runner. Or someone who was into exercise for that matter. Sure, I like to ride my road bike around Langley in the Spring, Summer, and Fall, but given the duration (at least an hour) and the difficulty in getting out the door (impossible), I have never ridden as much as I’d like. I always thought that getting fit would happen at some point in my life, but I never knew when nor did I have the motivation to make it happen.

As one gets older, one takes a critical look in the mirror and thinks, “Wow.” One then walks away from the mirror feeling overwhelmed, depressed, and in search of the whoopie pies that your daughter was making the other day. It seems easier to stuff our faces for comfort than actually figure a way out of your rut. Well, this winter, I had enough of the rut.

Anyone who lives in Vancouver knows that the rain can be constant. If it isn’t raining, its gloomy or about to rain. Sometimes it rains sideways, other times it can be so loud that it sounds as though your roof will come crashing in. Unless you have a gym pass, you don’t get out much. This winter, the rain threatened to eat me alive. I was getting so down in the dumps that I knew I either had to see a doctor about depression or get out of the house. I choose to get out of the house.

I downloaded Couch to 5K 8 weeks ago. This is an app for my iPhone that helps you get your fat butt off the couch and begin a running program. I began this program as a way to fill my day, get some exercise, and alleviate the feelings of gloom. I’ve began running before, only to stop as soon as the shin splints would kick in or my built in lazy gene took over. This time, for whatever reason and most likely due to the app, I managed to keep going.

Couch to 5K takes you through a cycle that breaks you in slowly. You run for 30 seconds, walk for a minute, and so on. Each week you go further and run more. The app mixes up your runs, so that you don’t feel bored or expect the same thing day in and day out. With ear phones plugged in, it tells you when to start and stop, and even gives you the option of tweeting your results (I choose not to tweet).

Perhaps it was the challenge. It becomes almost like a game. As each day ticked by and I completed the run, I became really interested in going again. Given the break in pace, I never had shin splints. I can also credit the shoes that I purchased from my husband. Zoot makes a great pair of running shoes. I’ve never had a pair that comfortable and more suited for my big, flat feet.

I’m on the end of week 7 of the 9 week program, and I can say that I am now well and truly addicted to running. This app makes it so easy to get out there, that even people with fat butts and a plethora of children in tow can do it. I have my three older kids ride their bikes, and I run with my toddler in a Mountain Equipment Coop jogging stroller. I was so determined to get out there and run though, that I was hitting the track with a double stroller and a pissed off baby.

In short, Couch to 5K does exactly what it says it will. It gets you off the couch and turns you into a runner. 8 weeks ago I never thought I would run for 25 minutes without falling over. Now I can do it and still walk after.

Exercising every day has saved my sanity this year. What they say about releasing endorphins is true. If you need a pick me up, get off the couch and go for a run. You won’t feel better overnight, but you definitely will feel as though you joined the human race again.