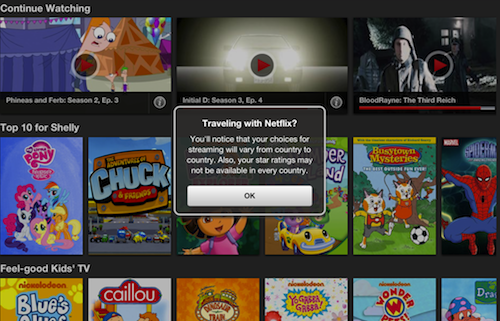 How to tell the difference between American and Canadian Netflix

If you’re wondering how to get Netflix US while in Canada, take a jump here really quick like a bunny and check it out. Once you have it, read on to know how to tell the difference between American and Canadian Netflix.

How to tell the difference between American and Canadian Netflix

While I pack away my shorts and pull out the Uggs, I’ve been considering the unfairness of the content on American and Canadian Netflix. It’s a little annoying if you really think about it – Here we are, leaves falling from the trees and summer effectively ending itself in August (where I am anyway), and our TV options are limited due to copyright blocking and Canadian vs US content laws (I know it’s not that simple, just bear with me. After all, I just returned from a two week road trip from Vancouver to California and discovered that as I drove, the temperature dropped and dropped and dropped. It was 32 in Red Bluff, CA at 9 am, and 11 degrees at midnight when I drove into Canada. That’s just nuts).

So, if you’re here you’re probably asking yourself the million dollar question – Is Netflix USA better than Netflix Canada? And the answer is, of course, it depends. If you like more options, more TV shows, and just, well, more, than Netflix USA is a fun addition to you nightly TV watching.

If you’ve wondered how to get Netflix USA while living in Canada, take a peek at my blog post on the topic (no, it’s not illegal to change your DNS settings).  Once you’ve got it all set up on  your computer, tablet, or smartphone, you’ll see a screen that says, “Traveling with Netflix? You’ll notice your choices for streaming will vary from Country to Country”. To the best of my knowledge, this message will not show up if you are changing your DNS settings on your Apple TV, Boxee Box, or any other type of gadget attached to your TV, but I’ve only tested it with Apple TV.

If you see that message, you’re ready to check out Netflix USA from  your happy perch in Canada. One other way I’ve used to find out if Netflix USA is running on my Canadian device is to check for Disney content and episodes of Glee. As sure as the sun shines on Finn and Rachel, as sure as Phineas and Ferb get up to the usual shenanigans, as sure as….well you know what I mean – If you see Disney stuff, you’ve ventured into USA territory.I recommend watching all of the behind the scenes Disney tours. They’re loads of fun on a rainy day, and you might be able to soak in some UV from your screen.

What else does Netflix USA have that Canada doesn’t? Scary episodes of ghost shows, new movies, great kids shows like Chuck the Truck, Fireman Sam, and new episodes of Dora. You might have to dig for the gold nuggets of Netflix US, but it’s worth it.

So there you have it – Have fun watching Netflix US while in Canada. And while we’re talking Glee, have you ever tried to say Kurt Hummel 10 times in a row without messing it up? It’s not quite a tongue twister, but it’s not easy to say without slurring either.