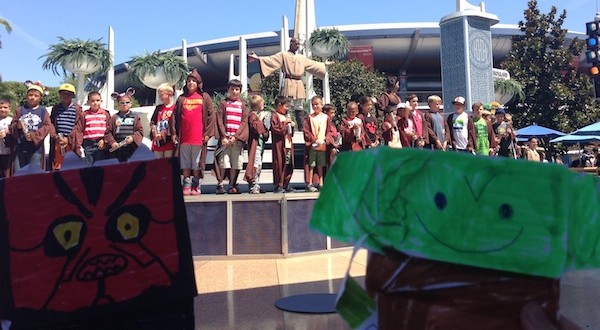 If my son had to choose his favorite from all of the Disneyland attractions, he’d choose the Jedi Training Academy. Complete with Storm Troopers, Jedi, and Darth Vader fighting an epic battle of good vs evil, there isn’t much about it that a boy wouldn’t like.

The Jedi Training Academy takes place 6 times per day so there are plenty of opportunities to stop by, but what happens if your kids don’t get picked from the crowd? It must be tough to choose from all those jumping kids, and I’ve seen tons of little ones crumple into tears when they don’t get picked. It’s happened to my kids quite a few times, but since then I’ve learned a few Jedi Training Academy Tips.

It’s pretty simple really. All you have to do is make sure your kids stand out. I’ve heard people say to get there early, to stand in the middle of the crowd, to jump up and down – none of these have worked for us, but I’ve found a few Jedi Training Academy tips that do work.

I’ll give you a few examples. 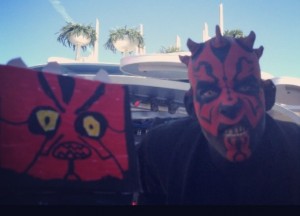 My boys have Star Wars costumes to spare. From Stormtroopers to Boba Fett, we have them all. The first year my son was old enough to try Jedi Training Academy we were there for Halloween. It was one of our first stops on our first day, and of course he was shattered when he didn’t get picked. Thankfully we had his Halloween costume with us for the Halloween party that night, so although it was 90 degrees in the shade he put it on (without the mask) and stood back in the lineup again for the next round.

Was he picked? You bet. How could a Jedi turn down a kid who was dressed up in a Star Wars costume? Every single time we go my boys are either wearing a Star Wars tshirt or have a costume along with them, and they get picked every time. 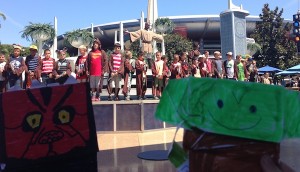 Out of all the times we’ve done the Jedi Training Academy, our visit in 2013 was the best. Every year we do a road trip from Vancouver to Disneyland and my kids look forward to it the entire year.

Last year my oldest son’s favorite book was ‘The Strange Case of Origami Yoda’ by Tom Angleberger, and he decided he was going to make some Origami puppets to take along with him to Disneyland. He worked on those puppets for hours, and he made two – Yoda and Darth Maul.

On the day we went to Disneyland for Jedi Training Academy we took the puppets along. I had left them in the hotel room, and he made me go back and get them just so he could have them for Star Wars training. I honestly didn’t see what the big deal was.

We got there, lined up, and when it was time for the Jedi to choose all the kids started jumping up and down. My son put a puppet on each hand and started jumping up and down waving them. It took a few minutes but the Jedi Master (it’s always been the same guy when we were there and he’s pretty amazing) started to laugh. Looking down at my son, he said, “You, with the puppets.”

What happened next was unexpected and seriously awesome.

Because I was video taping the entire thing for the boys, my husband would take the puppets and pop them randomly in and out of the video. Out of no where Darth Maul decided to take offense to our puppets, and the resulting experience was magical for the entire crowd. People were laughing hysterically.

It’s all here in the video below, and it just goes to show why I love Disneyland so very much. When  you’re there, magic really is everywhere.