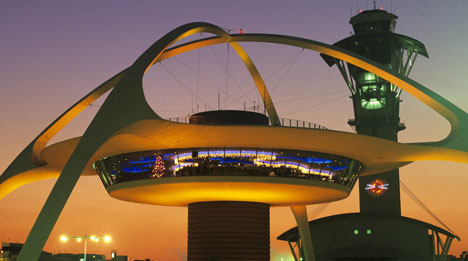 If you’ve flown into LAX anytime in the past oh, say 51 years, you’ll have seen the space age structure standing near the control tower and you’ve probably wondered what it was (kinda looks like a flying saucer that’s just landed. For fun, you can tell your kids it is a flying saucer and the aliens will be waiting for you when you get off the plane. I didn’t do that once, I swear).  A 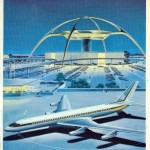 symbol of the Jet Age revamp of LAX, the Theme Building at Los Angeles Airport has stood since 1961 looking futuristic and well, that’s about it for many, many years.

In 1992, the Los Angeles City Council designated it a City Cultural and Historical Monument, and in 1997, the Encounter Restaurant LAX opened within the theme building.

Now why would you want to spend part of your vacation hanging out in the airport? For one, the Encounter Restaurant is a very cool place. The interior was designed by Walt Disney Imagineers Ed Sotto and Ellen Guevara, with WDI designer Michael Valentino creating the perfect lighting. Now I don’t know about you, but that place had me at WDI, and if you’re a Disneyphile like I am, it will have you too. If not, it’s a nice place to eat while you are relaxing before your flight. 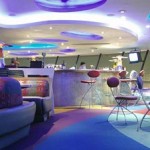 Although it looks like it could just fold up it’s legs and take off into the bright, blue LA sky, the Theme Building doesn’t actually move at all. In other words, if you’re looking for a spinning restaurant, this is not it. But they do have a great looking Space Cadet kid’s menu, reasonable prices, and Valet parking for only $6. In LA, I think that’s kind of a deal.

So the next time you fly into LAX to start your Californian vacation, be sure to check out the Encounter Restaurant LAX in the Theme Building. It’s a great way to experience the history of LA while enjoying fine dining. Or just have a cocktail to take the edge off your next flight. Whatever works.