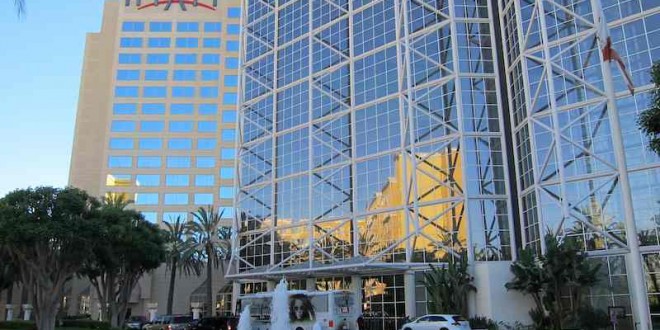 If you need me, I’ll be at the Hyatt – Hyatt Regency Orange County review

For a home away from home in Orange County, the Hyatt is a family favorite.

It’s safe to say that there aren’t very many hotels on the Anaheim strip of Harbour Blvd that I haven’t stayed at. I’ve been visiting California at least once a year since my kids were tiny, and every year I tried a new hotel. After staying, I never really felt the need to rebook at the same place. I’d move on to a new hotel near Disneyland, looking for something better. I guess in the grand scheme of things, there are travelers who stick to the same old, same old, and then there are people like me – Hotel Adventurers, always looking for something that would compel me to stay again. And it took me years, but I finally did.

In August of 2012 we found ourselves in need of an immediate hotel room. The Best Western in Orange, CA we had been staying in was, to make a long story short, a total bust, and we’d spent a few days at the Disney Paradise Pier at premium rates without a fridge or microwave so we were ready to move on. At this point in my 3 week working vacation, I was sick of switching hotel rooms. I just wanted to stay put somewhere clean and quiet. If it had a nice pool with palm trees too, well I certainly wouldn’t complain.

Originally, when I read the Hyatt Regency Orange County reviews on TripAdvisor, I didn’t think it was such a big deal there. I’d driven past it many times, even staying just across the street at the Crown Plaza once, but I never felt inclined to stay. This time, when we looked at the rates, we were totally impressed to see the Suites on Sale. They had a cool looking Kid Suite that was 50% off, and it had a fridge, microwave, and a separate room with bunk beds. The price was actually less than we were paying at the Best Western if you can believe it. I know I couldn’t. It took a nice, tall frapp from Starbucks in the lobby of the Hyatt to calm me down.

When we drove in, we were greeted by the Valet parking. My husband checked us in and came out with a nice itinerary of everything happening at the hotel in the next few days including a swim up pool party for the kids one night. The lobby – Beautiful. The Starbucks in the lobby – Beautiful. The air-conditioning – Amazing, even in the dead heat of August. And because we were Hyatt Passport members, (TIP: Always sign up for hotel loyalty programs, especially if you stay in hotels a lot. New perks are just around the corner) we received free internet for our stay. Bonus!

Our room was on the 6th floor overlooking the parking lot. I was OK with this. It had a huge wall of windows in the kid’s room. They loved the bunk beds, and there was enough drawer space. The room was really clean and big enough for all of us, and there was a nice desk for me to work at too. After what we had been through, I loved it.

The rest of the resort was just as impressive. There are two swimming pools, one in each wing, a basketball court, tennis court, and two cool restaurants in the lobby. OC Brewhouse had a kid’s menu with healthy choices like sunbutter sandwiches and fruit, and we tried a bunch of different things including the pizza.  They were always fast with their service too.

This hotel is not too far from Disneyland. I usually clocked in about 10 minutes if I parked in Mickey and Friends, and it’s literally across the street from Target for those last minute necessities or to load up on water, etc. before you hit the parks.

As with any hotel, there were a few downsides to the Hyatt Regency Orange County:

Yes, I liked this hotel. One of my favorite memories from that trip happened at the Hyatt Regency Orange County. We had a late 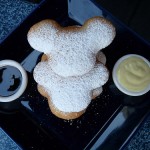 night at Disneyland, followed by a stop at the Lego Store in downtown Disney and a bag of Mickey beignets from Jazz Kitchen. When we walked into the hotel, it was around 11 pm. The kid’s insisted on building their new lego and I was having so much fun I didn’t feel like enforcing bedtime. So it became midnight, then 1 am, and they were still awake and playing. When kids get that tired, conversations get really weird. I always look back on that night and smile, because that’s really what a vacation is all about.

As far as Hyatt Regency Orange County reviews go, this is a good one. It was perfect for August in California and a great place to stay when you’re visiting Disneyland. In fact, I liked it so much I gave up my Hotel Adventuring ways and actually stayed there again in December for a week. It was just as good then as it was the first time, only this time the server at the OC Brewhouse gave me a glass of some sort of orange beer on tap and instantly became my new best friend.