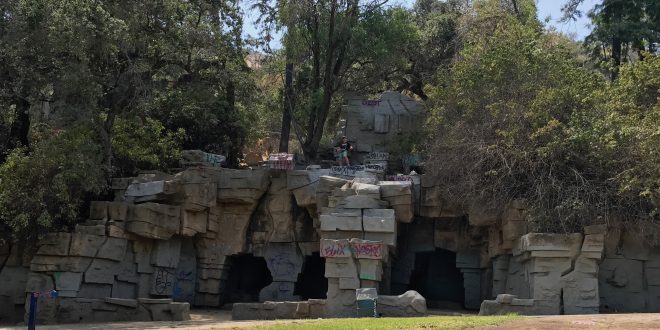 If you’re on a road trip just rolling through LA on your way to Disneyland for a quick 5 day blast, you probably wouldn’t think about visiting Griffith Park. But if you’re like me, completely jazzed by LA history and a big fan of all those abandoned shows on Youtube, you really need to make a stop there. You can go at night and take in the Griffith Observatory, drive through Forest Lawn Cemetery (I need to do an entire blog post on how bizarre that 15 min drive was), or, as was our case on our way out of LA last trip, visit the abandoned old LA zoo.

What is the old LA zoo?

Established in 1896, Griffith Park has been an oasis of green (in the spring and winter) and brown (almost every other month of the year) for over a century. The old LA zoo opened in Griffith Park in 1912, and they had a whopping 15 animals in the cages. Some of those animals were donated by a producer who had them at his movie studio.

In its hey day the zoo grew, and they added quite a few animals including monkeys, llamas, penguins, and Topsy, a camel with two broken humps. You can read the full history of the old zoo here. It’s worth a read, especially if you plan on going.

How do you get to the old LA zoo? 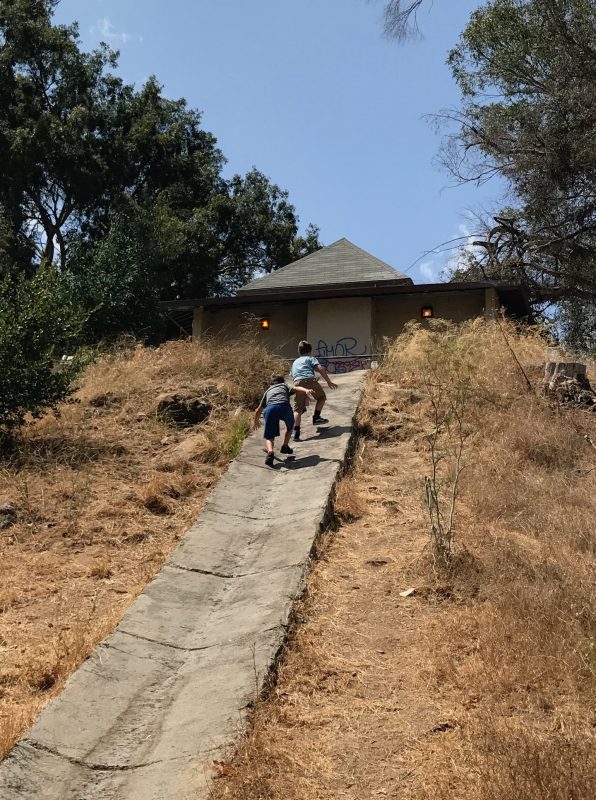 We parked in the picnic area parking lot and hiked up.

What can you see at the old LA zoo?

When you walk up to the old zoo you’ll see a large empty picnic area. This seems to be a piece of real estate that wasps have settled into for the long haul, so watch out with your food and drinks because they really like those. Also, if you’re going in the depths of summer the way we did, it’s hot as hell.

It’s a light walk from the bottom lot to the top where the old LA zoo is, and from there you walk across a small field to get to the cages.

What you’ll see: beer cans, graffiti, the odd person doing a photo shoot, and garbage pile upon garbage pile. It’s bizarre, and if you go when no one else is there and the wind kicks up a little bit, it’s also really eerie.

Side note: what is it with wind in LA? It has a really strange feel to it.

Like so many others who have walked around there and lived to yelp about it, I was struck by the insanity of putting large animals in such small enclosures. The actual space the animals occupied is nothing short of abusive, and I felt sick when I thought about what they must have gone through in living there. Having my own largish herd of animals, I can’t imagine confining them like that.

When you walk around the back you see tiny staircases the zoo keepers would use to access the animals. These areas are littered with glass and garbage, so be careful.

It’s a light hike to walk around the back of the cages, but most stuff is gated off so you can’t enter.

If you’re looking for something a little unusual to do when you’re next in LA, this is definitely one of those stops. This is a city that seems to struggle with preserving history, knocking down gorgeous buildings and celebrity homes like Pickfair and half of Roxbury, so it’s both interesting and really sad to see this still standing.

I felt overcome with anxiety when I was there, but I love all creatures great and small. Just taking a look at tiny cement enclosures and seeing how narrow the tunnels were was enough for me. There were some spots that were so narrow I was too claustrophobic to even look inside.

For kids older than 7 or 8, this place is an abandoned paradise. I would recommend really staying on their tail though. There are far too many hazards here to let them run and jump, and I held by 8 year old’s hand almost the entire time.

If you go, let me know what you thought.

For more on Griffith Park and LA in general, check out my other travel posts.