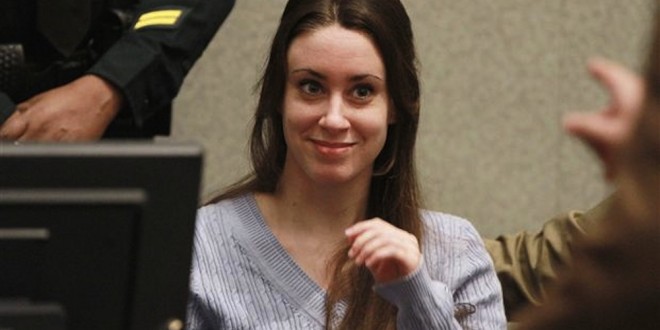 Social networking may help decide what happens next for Casey Anthony

Casey Anthony, the now infamous “Tot Mom” who has been number one on Nancy Grace’s hit list for the past three years, was recently acquitted of murder charges in the death of her daughter Caylee Marie Anthony.  She was found not guilty of child abuse and aggravated manslaughter, and was instead charged with four misdemeanors on charges of providing false information to law enforcement.

The sentence handed down today indicated that Ms.Anthony would be required to spend four years in jail as well as pay a $4000 fine.  Instead of spending her life rotting in jail or facing the death penalty for the role she played in the death of her daughter, whatever that role may have been, she will pay out the equivalent of a used car and walk away into a rather uncertain future.

The outrage sparked on social media networks was swift and furious. With comments ranging from simple disbelief to full outrage at the lack of justice for a defenseless two year old, Twitter and Facebook have been lit up over the ruling for the past 48 hours in an unprecedented scorn for Ms.Anthony and the justice system in general.

Although the case is now closed and no further legal action can be taken,  it doesn’t appear to be legal action that Casey Anthony needs to worry about.

Within hours of the verdict, a posting was placed on Change.org petitioning the President of the United States as well as key lawmakers to force parents to report their child missing within 24 hours or be charged with a felony. The petition has since gone viral on Facebook, with 29,588 ‘likes’ as of this posting.

Yet another concern of the public is that, in this media driven reality television fueled world we live in, Casey Anthony could profit from her daughter’s death. As quoted in the LA Times , Casey stated herself that she wished to write a book after all was said and done, “Anthony describes the book as a “partial memoir/comedy/relationship advice book for those not in the know. It’s a way to settle many rumors and to share my insight about love, life and most important – God,” she wrote. “Who knows.”

An article published by ABC News detailed how Anthony could make as more than $750,000 with a book deal was smacked down just as quickly by the Huffington Post Book section, detailing why Anthony couldn’t possibly have her story optioned for money.

It appears that, thank you to Twitter and Facebook, as quickly as a door will open for this woman, it will slam shut due to public outrage. And that’s a good thing.