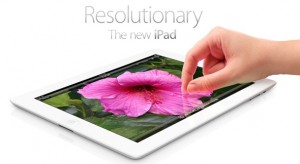 I will admit it. I skipped out on the iPad 2. I’m all for upgrading gadgets on a yearly basis, but even with the camera built-in I didn’t see the need to upgrade. I was, and still am, extremely happy with the first generation iPad. Basically, I was waiting it out for the #3.

And with the announcement of the new iPad, now might be the time to pick one up. Here’s a few reasons why:

But Mom, everybody has one!

Yes, they really do. Well, maybe not everybody but the numbers are definitely increasing. And in recent research, a whopping 70% of tablet owners said their kids used the device. Even if you didn’t want them to play anything but educational games, having a tablet is a brain-opener for your kids.

Before I had my iPad, my kids would play games on my computer. And when they’d get bored of that game, whether it be the ‘Grade One Fun Curriculum” game I spent $30 on or the drawing game I spent $50 on, I’d be faced with the cost of purchasing new games. Not to mention the fact despite my net-nanny and pop up blocker, when they surfed the Web stupid stuff still managed to infiltrate their computer and pop up at the most inopportune times. It was minor, but I don’t want to have to explain again the concept of scammers and why some Mom from Nebraska really isn’t making $2000 per day working at home.

With a tablet, you control the experience. If you don’t want them to surf the web, delete the web browser. Need to find a new game for them to play on a road trip? Download 5 for under $5. With a touch screen, it caters to toddler’s fingers. My 2 year old is so immersed in touch screens he’ll look at my computer and try to move things around the screen with his finger.

I don’t know about you, but my old camcorder doesn’t let me tape in 1080p. I’ve been sending my old tapes from previous camcorders into Costco to be put onto DVD and the result is dismal. Blurry, shaky, dark – It’s not really how I want to relive my kid’s at Disneyland or their Christmas concert. With 1080p video recording and built-in software stabilization to stop your shaky hands from ruining the moment, the new iPad will become your go-to recording device.

If you have an 2nd generation iPad and Apple TV, you already know what AirPlay Mirroring is about. With AirPlay, you can display your iPad screen on your big screen TV. It’s a wireless feature with the new iPad, so you don’t even need to hook up via an HDMI cable anymore.

You can stream the videos and music you have on your new iPad to your big screen, which appeals when the kids are fighting over the iPad and everyone wants to watch one thing. But what about Apps? This is where it could get interesting.

Here’s a list of AirPlay-enabled apps, and although there aren’t very many, you can bet your hat on the fact more will be coming soon. I don’t know about you, but the option of playing my favourite apps on the big screen appeals to me. However I have been known to have issues with people peering over my shoulder, so it could be just me.

There are many other features in the new iPad that make me want to get one, including a faster processor, retina display, and dictation (which appeals to the writer in me, although if I started dictating dialogue around the kids they’d think I’d lost my mind). If you’ve never had a tablet, this might be the time to pick one up.