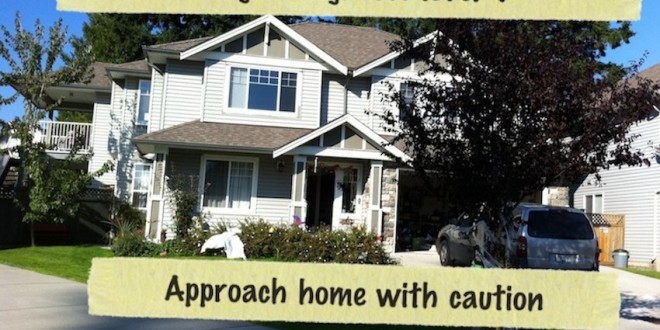 5 Apps that should be developed for parents

I find that more and more, it’s not about what new and exciting app has popped up on the app store on any given day that gets me going. I find that every app I take a look at results in another as-yet-undeveloped app idea popping into my head. As in, “This app is great, but an app that does x-y-z would be so much better.”

Apple is lucky I do not have the ability to develop apps, because I could come up with some useful doozies that every parent would be clamoring for:

There is nothing your wife likes less than when you don’t follow through on something, whether that be forgetting to go to the dump and coming home with a truckload full of garbage or going out for a football game with your buddies and not coming home until 5 am (extra points docked if you didn’t bother to call). And ladies, you aren’t left out either. If you pull up with bags and boxes that are coming out the windows of your mini-van, effectively blowing your clothing budget for the entire year in one day, you are going to want to test the waters.

Dog-house-o-meter would scan your house, sense the waves of stress coming off of it via its unique GPS system, and give you a rating as to whether you should go in or preemptively just curl up with Fido in the backyard.

I can tell you that the phrase, “What does my wife mean when she says….” is Googled often. More than often. There is a tidal wave of Googling going on when men are trying to figure out what their wives are actually saying when they are saying something. Does, “It’s ok, go” really mean it’s ok to go, or does it mean, “You better get your act together buddy, because if you walk out that door I am going to sell your Star Wars action figure collection.”

The wife translator would decipher those all important statements, saving you a lot of time and energy in attempting to really figure out what she is saying. I would also create an alternate version for Husbands, where their constant grunts would be deciphered into flowing English.

There are so many different types of tantrums, ranging in severity from a simple flop down onto their knees to a full blown helicopter. The tantrum translator app would scan your writhing child and give you an estimated name for the tantrum, along with the embarrassment rating and whether you have the opportunity to actually stay at the mall after it’s over.

You know how you see your baby or toddler’s face scrunch up with effort, and yet you can’t seem to resist sticking your nose at the back of their butt to see if they actually pooped? It’s almost as though a parent wants to smell the diaper, just to confirm what they already know. I’ve heard tell of moms pulling back the elastic leg parts of the diaper for confirmation, only to pull back a messy finger. Horrifying, I know.

The Diaper sensor would scan the offending diaper, offering up an all clear or a volcanic rating.  You could scan over your shoulder in the car (but not while driving) and find out right away if it’s a four alarm pull over or can wait until you get to your destination.

Where’s my lost crap? The App

When my 3rd child was a baby, I came up with the idea of putting a tiny GPS chip on his soother, because those stupid soothers would go missing at the absolute worst times. In the middle of the night, I’d be on my hands and knees looking under my bed and saying a prayer that I would find one. When I did, it really did feel like a small miracle had just happened, because I could go back to sleep.

At that time, there were no iPhones and no ability to actually act on my plans, but there is now! I forsee a box of tiny GPS stickers, as small as the head of a tiny pin, affixed to various objects in my house. My keys, my kid’s jackets, lunchboxes, favorite stuffies: You name it. Anything that I stress about looking for or need to find right away is up for the stickering. The app would scan my house and tell me under which bed or closet these items are located in, or in the worst case scenario, which toilet they flushed something down that will never be returned.

I feel as though these app ideas would be a brilliant addition to the app store, and that they would really help parents. Of course, all of these ideas will contribute to our abundant over-dependence on our iPhones, but I’m OK with that.

And if you are an app developer and want to talk about developing some of my ideas, give me a ring. I’ve got a million of them.

All app ideas and content copyright owned by Shelly Wutke