Nestles Babynes – The Keurig for baby formula not available in Canada and the USA, yet

And just when I thought I’ve seen it all: Nestles BabyNes milk machine hits Switzerland 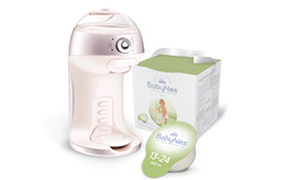 The next time you load up your Keurig for a piping hot cup of coffee in the morning, you can just reach over and make one for your baby too. Nestle recently released a new baby formula machine called the “BabyNes System,” a product similar to a Keurig coffee maker that serves up single servings of milk for babies. The formula comes out in the proper serving size and is toasty warm and ready for you to put in the bottle.

From the BabyNes website, “The single-serve portions are sealed in capsules, used in the proprietary BabyNes machine, which recognizes each capsule and prepares the bottle with precisely the right dosage and temperature, at the push of a button, in less than one minute. The BabyNes machine combines state-of-the-art technology with the utmost safety and convenience, and ensures a hygienic, quick and easy bottle preparation.”

It’s an interesting concept. On one hand, it certainly simplifies the bottle making process by removing the measuring and warming steps. Your baby is sure to receive the proper amount of formula, no over milking them with the BabyNes. It could also take the pain out of bottle feeding in the middle of the night.

And so, despite the apparent benefits of such a machine, breastfeeding mother’s around the world recoiled in horror at the release of such a product.

A blog called BlackTating called the BabyNes “Nestle’s New Evil Genius.” Twitter lit up with commentary on the release of the machine, in some cases putting horns and a tail on the company because of their desire to make formula a trendy, luxury item.

The World Health Organization recommends that you breastfeed your infant exclusively for six months, but also states that you should continue to breastfeed until the child is two (or beyond if you’d like). In Canada, almost 90% of new mothers will breastfeed their children initially. Exclusive breastfeeding tends to drop off by the time the baby is six months old, and this is where Nestle wants to step in.

Although there are no prices on the BabyNes website, it is rumored to be anywhere from $300 to $650.

No word on when the corporate giant will bring this product to Canada and the USA. If they do, be sure to grab your bag of popcorn and settle back for the fireworks on social networking websites like Twitter and Facebook.