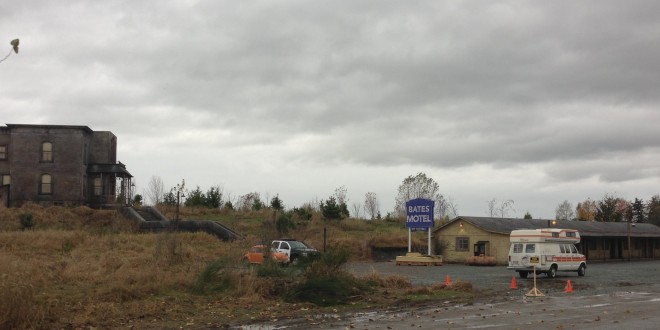 When you take your pile of cardboard boxes to the garbage dump for recycling, you don’t think you’re going to stumble across something that would fit in better at Universal Studios in Hollywood than good old Aldergrove. But stumble you will, and stop, and possibly sit in the entrance to the dump and try to snap off a few photos of what can only be deemed as a glorious addition to the local scenery.

The Bates Motel set from the just-premiered A&E series of the same name, is located just down 272nd avenue near the US/Canadian border in Aldergrove, and judging from the initial ratings, it looks like it will be there for awhile.

The first time we drove by it, it was just a shell of hotel and house, perched high up on what used to the be the town dump. But you could tell right away, given the structure of the buildings and the fact that we had just visited Universal last summer, that this was going to be an actual Bates Motel. At the time though, we had no idea why. I desperately wanted it to be a coffee house. You win some, you lose some. 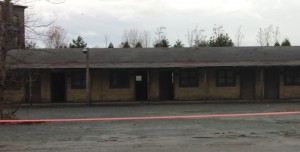 It’s hard to take photos of this place because there is security everywhere, but if you drive by during shooting you’ll see inside the Motel and some lights on in the house at night. Which, of course, makes it ultra-scary for anyone who ventures near it. It must have been a popular stop at Halloween this past year.

So if you’re local or just looking for things to do in this brutal weather, check out the Bates Motel set in Aldergrove and be sure to tune into the A&E Series for more Psycho fun.