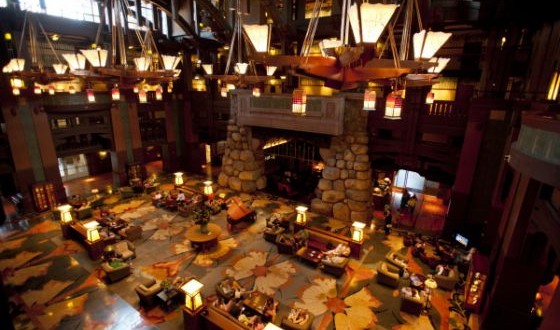 This Disneyland Grand Californian Hotel Review is a re-post of a review from my old blog, but it’s worth a read if you’re heading to the Anaheim area.

The year was 1978 and I was 7 years old. I had just flown (back when you could smoke on airplanes, I remember there was a haze the entire time!) from Saskatchewan in the dead of winter with my parents and brothers for a family trip to Disneyland.

I remember walking into the lobby of the Disneyland Hotel and just being awe struck. It seemed so huge, with its palm trees and pillars. We stayed in a bungalow off the pool area, and although my mom says that the pool was empty, I remember lying out on the chairs and suntanning. The trams would pull up right to the hotel, and you could see Disneyland from way across the parking lot. We took the monorail once, but my mom preferred the tram for some reason.

I’ve been to Disneyland many, many times since then, but we never stayed in a hotel on site. It was always prohibitively expensive, and although I knew it would be amazing, I just couldn’t reason out the expenditure. This time though, was different. To celebrate ten years of marriage, my wonderful husband gifted me with a 5 night stay at the Grand Californian Resort at Disneyland. (BTW, I was not given compensation for this review, although if there are any Disney execs out there that need a writer, I’m here!)

We had what was possibly our best trip there ever, despite the fact that I have four kids in tow, and the reason was entirely the hotel. Yes, there were nit picky little things that I could harp on, but the fact is you pay for the experience of being there, and that alone was worth it.

First off, the location is ridiculously amazing. You walk out the private entrance straight into California Adventure. The Grizzy River Ride was right in front of my room, and I could see Soaring over California and the fireworks every night from my deck. Sitting on that deck, I felt like I was IN the park, even when I wasn’t. Because you have a private entrance, you can get Fast Passes for the World Of Color before the general gates of the park open. Downtown Disney is just off the side entrance. We spent many nights just walking around there. We took a day off and spent a lot of time in the hotel. One afternoon the kids went on a Scavenger hunt. At the end of it, the prize was a Mickey Cookie from the White Water Cafe. Every afternoon there is a story teller that reads bedtime stories to the kids in front of the fire, and there is a little waiting area for the kids to watch cartoons while you check in or out. If you were tucking your kids into bed each night, you can watch Disney TV and have a princess read a story to the kids. We saw an episode where Cinderella read, as well as one with Belle. They also have channels that go through each attraction one by one, as well as broadcast the fireworks music.

Although the room itself was on the small side, there was a queen bed with super comfy linens and a bunk bed with a trundle bed at the bottom. The bunk will sleep three. The bathroom area was nice, with 2 sinks, but the tub was really tiny. Each room has a Pack n Play in the closet, in case you want to put baby in there (not in the closet, in the pack in play).

One of my favorite room touches was the lanterns flanking the bed. They had a dimmer switch, so each night we’d dim them enough to provide a night light. It was very cozy. I think I need a dimmer switch and wall sconces in every room in my house now. It felt like being in a log cabin. Every night before bed the housekeeping staff would come in and turn down the blankets, adding a pile of chocolate coins to our bed. The kids LOVED that.

When you stay in a Disney resort, you get a ‘key’ to Disneyland. Meaning, CHARGE IT!!! Everywhere they’d take a credit card, they’d take my card. Now if I could only do that without having to pay the bill at the end. Hmmmm….

Whenever they would address you on the phone or in person, they’d say “Welcome Home, Wutke family.” Although it felt like being on an episode of Extreme Home Makeover, I just really liked that touch.

Wireless internet and self parking are included in your room fee. That’s always nice, no matter where you stay. So many hotels on that strip charge parking AND internet.

Something that perhaps people don’t know when staying in the Disney hotels. You can pool hop! We spent the afternoon at the Neverland Pool at the Disneyland hotel. I hadn’t been back since I was a kid, and although it was completely different, it was very cool just to be there.

It was an amazing experience, and I only had a few, very minor issues. One, the pool was so crowded that it was unpleasant to be there. Its not like the hotel can control that, or the children who thought that diving and kicking me in the head was funny. They have comfy reclining chairs and a full valet/bar service.

I loved hearing the crowds at night and seeing the happy people while I was sitting on the deck. If you don’t like noise, you might not like the park view rooms. I loved opening the doors in the middle of the night and just hearing nothing but the crickets (or the recording of crickets. They actually play recorded owls and insects when you walk their lit paths at night).

The blankets on the bunk beds were a bit worn. I expected more plush bedding. As I said before, the rooms were on the small side, but the closet was huge. I turned that into a small theater for the kids one night when I was trying to get the baby to sleep.

Staying on site let me find out if one of the ‘urban myths’ of Disney is true. I’ve heard that there are a ton of feral cats living at the resort, and that they are fed by the night staff. One night I opened the deck doors after the park had closed and I saw a bunch, probably about 5 or 6, of cats just sauntering down the road in front of the Grizzly River Ride. It was hilarious! I wish I had taken a picture.

I truly feel as though this hotel was worth the money, because you pay for the location and the EXPERIENCE of it all. I don’t think I can go back to staying in a strip hotel (sorry, honey!)