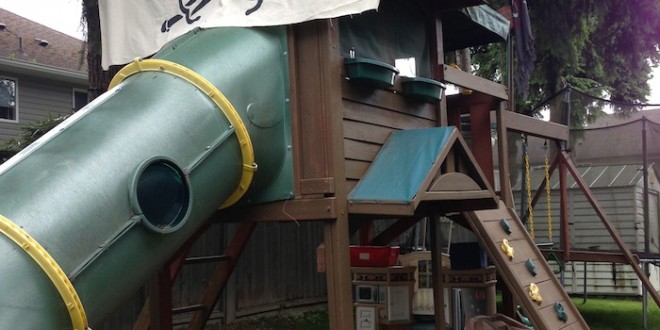 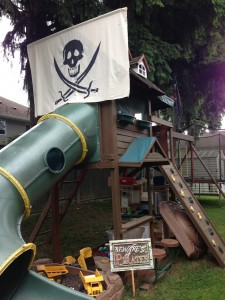 I’ve got 4 kids. The fact that I have one of those Toys R US wooden playgrounds taking up half my backyard should come as no surprise to anyone. Not only does it save me from having to go to the local park, but has the capability to become a pseudo tree fort or Ninjago Battle Front on any given day.

But as my kids have grown,  they became less interested in the same-old, same-old wooden playground, and I realized that unless I want to sell it and remove it from my backyard completely, I’m going to have to spice things up a bit.

So I took my wooden playground and turned it into a DIY pirate ship playhouse.

No, I didn’t spend a ton of money – the entire transformation came in under $50.

Here’s how I turned my old wooden playground into a pirate ship playhouse:

Yes, you can do it more expensively or you can buy yourself an actual pirate playhouse from somewhere, but if you want to give your little pirate enthusiast that pirate ship feel and you don’t want to spend a ton of money, re-doing your wooden playground is a great idea.