Home - Featured - What To Expect When You’re Expecting Hand, Foot, And Mouth Disease 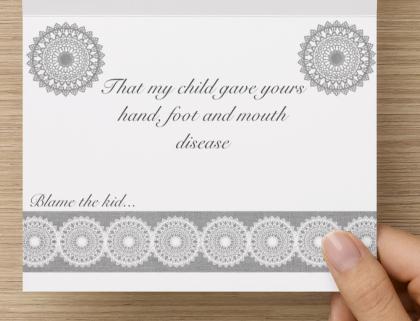 What To Expect When You’re Expecting Hand, Foot, And Mouth Disease

After a very interesting fall complete with a teacher’s strike that left my kids at home for over 3 months of summer vacation, I was ready for all 4 of my kids to be in the school full time. Once upon a time I had dreaded such a thing, and couldn’t imagine what I’d do with myself during the day when they were all in school. Thanks to the teacher’s strike, I was MORE than ready for it go down. It helps that they, after such a long break, were very happy to go back.

But just when I was about to enjoy some Starbucks and a nice browse through the aisles of Home Goods I’ve been too scared to look in because my 5 year old likes to pick up glass objects (did you know they sell organic coconut sugar? Nope, neither did I), illness started to strike. And not just any illness either – we started off slowly with what appeared to be a cold and then WHAM, we’ve got a rather nasty outbreak of Hand, Foot, and Mouth. Otherwise known as the Coxsackie virus, this little gem is making the rounds at my kids school. My 8 year old might have brought it home, but my 5 year old just hit it out of the park by rashing it up all over his body.

Even his butt isn’t safe at this point.

I feel so incredibly bad for him right now, and for you if you’ve come here looking for information about it because your child is sick. That’s why I thought creating a specific timeline of events can help you know what to expect from Hand, Foot, and Mouth, and maybe help you through the very pivotal ‘evening of rash’ as I like to call it.

Let me just say right off the bat that I’m not a doctor or a nurse – I’m a mom who has 4 kids that have have come down with  everything from Roseola to Scarlet Fever. The crazy thing about Hand, Foot, and Mouth is that it can be very specific in how it rolls out. Not everyone gets it as badly as some, but when those few do get it, it’s almost like it’s on a timer.

Not only did my 8 year old have it, he’s passed it on to a friend and, as I mentioned, his 5 year old brother. One can only hope that the Coxsackie rein of terror will end there.

I feel so bad that he gave it to his friend that I went out and bought his mom a gift. I wanted to make her a card too, but there is no card out there that says, “Hey, I’m sorry my kid gave your kids Hand, Foot, and Mouth.”

So my daughter and I made one, then she made another. It’s copied below. I plan on giving it to all of my son’s friends, because due to the highly contagious nature of this illness, more kids will get it I’m sure.

If you print it on card stock, these hand, foot, and mouth greeting cards will look beautiful and send a sincere message.

Hand, Foot, and Mouth is NO FUN for anyone. Here’s hoping your outbreak is short and sweet.