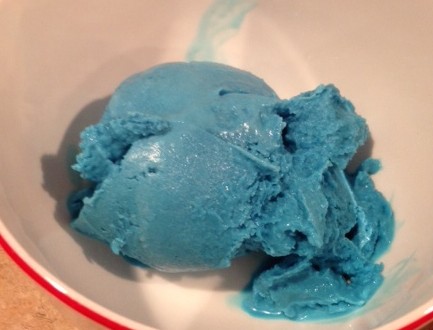 I grew up watching the smurfs, so when we stumbled upon Blue Smurf ice cream in our local gelato spot, I was a bit grossed out. My kids however, were in love with it. It tastes a bit like Cotton Candy and Raspberry, and the color is definitely attractive to a pile of kids who think dying their tongues different colors is a fun thing to do.

After spending $15 on a small bucket of the stuff, I decided there must be a less expensive way for the kids to get their smurf fix. Digging out my trusty ice cream maker from the depths of my crawl space, I hit the web for a recipe that would work. I found this one below on seriouseats.com.

I did sub out the raspberry flavor for some cotton candy extract we picked up at our local cupcake store, and after a taste test, I was declared the winner in the Smurf homemade ice cream war of 2014 (I didn’t know there was a battle going on, I’m just too cheap to spend $15 for a small bucket!)