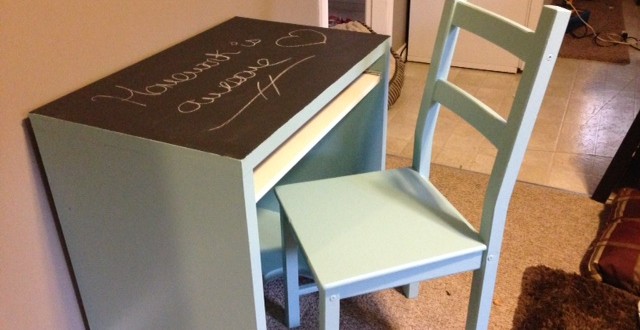 Have you heard of Ikea Hacks? I hadn’t until recently, but this site is truly addicting in so many ways. The idea of performing an Ikea Hack on some of my well worn Ikea furniture is just too good to resist. After all, I used to try to give it away or take it to the dump if it was too broken down. 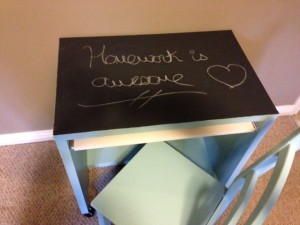 This winter I was presented with a dilemma. I had an entire newish Ikea entertainment center set up downstairs, but the room was just too dark and gloomy to want to be in during a truly grey Canadian winter. I also had a few of those LACK tables kicking around, and although I used them, I didn’t really like them.

What started out as a simple redo of a muddy brown electric fireplace (turned out amazing by the way) became a workstation for my Ikea Hack. And hack I did. I started out with my son’s computer desk and chair. It was pretty beat up and broken looking, but I had a feeling it could be quite spectacular with a little sanding and paint.

First, I took my power sander and sanded the top of the desk. I don’t know what I was expecting, but never having sanded an Ikea piece of ‘furniture’ (if you can call something created from particle board and plastic sheeting furniture) I half expected it to melt under the pressure.

After the top sanding didn’t result in a puddle of powder at my feet, I kept going until the surface was scuffed up enough to paint.

I used Kilz primer for this job, and although it definitely was more expensive to buy than other primer, it also covered the best. I put two coats of primer, then let it sit for two days.

Then I put on a bright coat of Behr paint, and did two coats of that. I also did the chair at the same time, but that was a lot easier to paint given that it was actual wood.

When I was finished painting the desk, I put two coats of chalkboard paint on the top. I thought it would be cool if my kids could use the top of the desk as a doodle pad or scratch pad for homework. 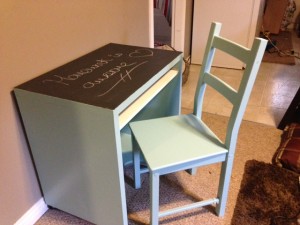 Once that was dry, I used chalk to ‘prime’ the chalkboard by covering the entire area with a wide scuff marks. I’m not sure how that works, but the lady at Benjamin Moore told me to do it so I did. I generally listen to anyone from Benjamin Moore, because I feel they have superior design skills to mine.

Once the chalkboard desk top was primed, I wiped it down with a damp cloth. Then I wrote, “Homework is Awesome” and drew a heart. Because I think it is awesome. My kids erased it pretty fast.