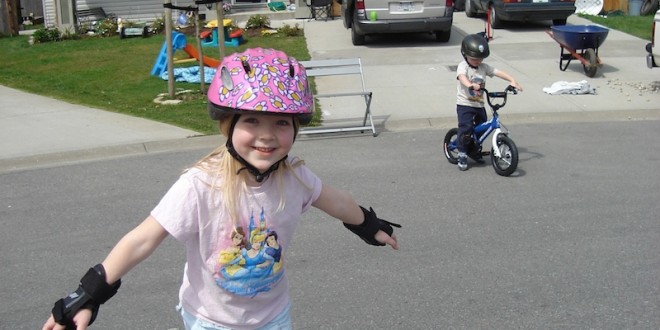 I don’t know anyone who doesn’t look at a certain toy and have flashbacks from their childhood. For me, it’s Cabbage Patch Dolls. At age 13, when all of my friends were starting to think about boys and makeup, my parents gifted me with one of the coveted Cabbage Patch Dolls. And even though part of me felt like I was too old, I was so happy to have her. To this day, if I smell baby powder I think of my favourite doll.

Fast forward to my own kid’s toy box. I’m not surprised at all that the sentimental feeling carries on with their toys, and I find I’m just as distressed as they are if we lose track of a favourite Buzz Lightyear or a must-have stuffie. Toys represent memories, a stage of life my kids went through, and I have so many great memories of my own of me stalking the toy store and bringing home that one toy they had to have.

But the best memory I’ve ever had with toys actually happened right out on our front street. We live in a cul-de-sac, and our neighbors were all young families with kids who were the same age as ours. Every spring the doors would fly open and the kids would stream out, running and playing on the street with their bikes and skates, and every summer we’d haul out a fire pit and have BBQs that would last long after the kids fell asleep in our laps.

One gorgeous Vancouver spring day, my neighbors and I were trying to figure out a way to keep the 10 kids we had between us busy. The play pools we had weren’t cutting it, and they didn’t feel like riding bikes. On impulse, my son went in the house and started pulling out his Imaginext sets. One by one, out came a Batcave, a Castle, and a T-Rex. Then he pulled out a sack like Santa and brought out all of his Imaginext accessories including firetrucks, Batcars, and piles of characters.

As we watched him, he arranged the sets on the street right in front of our house, lining up the characters just so. Within minutes the other kids were heading for their own toy boxes and bringing out a haul of toys. Before we knew it we had dollhouses mixing in perfectly with Gotham City. Dinosaurs were taking over the firehall, and there was an odd situation going on in the castle that involved roasted chickens and possibly a roasted knight (he got into a tussle with Barbie. What can I say?) 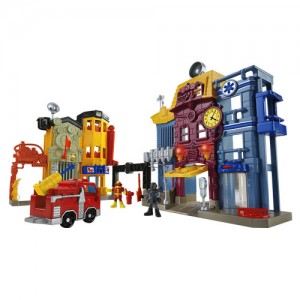 The Moms pulled out lawn chairs and pitched in when we were needed, but with all of the toys laid out in front of us, those kids played for hours. By the time we pulled them all in, it was getting dark and past their bedtime. Looking back on it, it truly was the perfect spring day.

Like all neighborhoods, people move on and away, and most of those families are now living elsewhere. But it’s one of the great memories we bring up when we connect after not seeing each other for awhile, and it’s something nice to look back on when the kids and I pull out all of the Imaginext toys and get down to playing.

The great thing about Imaginext is that they’re always coming out with a new way to play and new ways to make memories. The latest fascination at my house is the Imaginext Rescue City Centre. 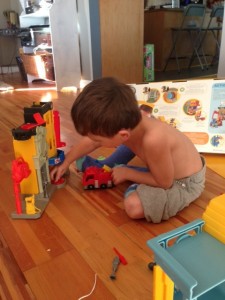 When my little guy started playing with it he yelled, “It has a jail Mom!” After watching him drive his fire truck up to the jail and deposit his figure behind bars, I can see the appeal. But I’d say the most interactive part of the set are the sounds. As he’s cruising up and down the street and shooting off water cannons in the fire truck, the Rescue City Centre talks back to him, and I’ve never seen him move so fast to put the ‘creeper’ behind bars was when the set says, “Calling all cars – Please respond!”

Like all of the other Imaginext sets we’ve acquired over the years, the Imaginext Rescue City Centre guarantees fun times for the kids and a nice block of peace and quiet for Mom. Oh, and the fact that they use simple to undo twist ties in their packaging isn’t a bad selling feature either.

Once you’ve clicked on the Imaginext site, be sure to check out the webisodes! They’re a great way to spend an hour cuddling on the couch.

“Disclosure: I am part of the Fisher-Price Imaginext Blogger Campaign with Mom Central Canada and I receive special perks as part of my affiliation with this group. The opinions on this blog are my own.”