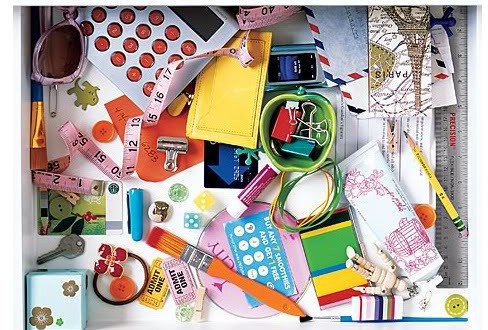 The day after Thanksgiving, in preparation for the toy bomb that will hit our house on Christmas morning, my wife and I always go down into the basement to discreetly throw away some of our kid’s stuff.  We always begin our witch hunt behind and under, figuring that any object that survived unnoticed for a year behind the doll house or under the toy box will not break our daughters’ hearts too badly.  It’s the natural order of things, we tell ourselves as we indiscriminately drop Little People into the plastic bag or shove a forsaken stuffed elephant inside a cardboard box, these old toys will be replaced by newer, better ones.

I must admit, however, that I am a little disturbed by the zeal with which my wife eradicates these forgotten playthings, and her frenzy sometimes spills over into other categories of stuff. Once or twice I have caught her trying to sneak something of mine into the pile, a crime that she tries to brush off as an innocent mistake, but I am wise to her game and question her actions head-on.

“Really?  You want to keep the sumo wrestler cookie jar?  When exactly do you think you’ll be needing this?”

“When we get our new place, I’ll put it in my TV room—you know, with all my man stuff.”

“Oh, you’re right.  And then you can host that Chinese-themed party and put the fortune cookies in the sumo,” she says.

“Sumo wrestlers are Japa—” I try to tell her.

“Or like this man stuff?”  She interrupts, reaching over to the shelf and picking up a small cigar box, which she opens to reveal old movie stubs.  She shuffles through the box and holds one ticket up.  “Howard the Duck, 1986.  Very manly.”

“We should definitely keep this,” she says, ignoring me.  She holds a Ric Flair wrestling figure up next to her face and smiles like she’s in a commercial.  “All the men play with dolls in red tights,” she sings.

“Action figures,” I answer.  “Uniform,” I correct.  I sense my argument weakening and change my approach, walking over to her and snatching the Nature Boy out of her hand and placing him back on the shelf.  “Maybe you’re right I say.  I’ll think about throwing him away and getting rid of some other stuff too—that make you happy?”

“Very.  But what about your manly TV room?”

“It will just have to be a little less manly.”

Theresa is not the sentimental type.  She recycles her clothes annually, gives away books after she finishes them, and you will never find her behind a camera.  Her mind just doesn’t work that way.  She lives in the moment, appreciates it, and doesn’t want to waste any time taking pictures or buying crap that will remind her of it later.

I, on the other hand, am a sentimental son-of-a-gun.  In addition to old movie tickets, I collect magnets, save letters, and stack my shelves with hundreds of books, by theme.  I am also the family photographer, snapping shots on a daily basis as if we’ll be publishing a yearbook come June.  I like having things.  Keeping things.  Saving things.  They remind me of good times.  I can pick up my middle school football jersey and almost feel myself sitting on the bench or getting tackled.  Each concert ticket recalls a specific group of people and the tailgate we had.  I still leaf through old sketchbooks from high school.

I was the youngest of three brothers and as a result, was not afforded much privacy.  My room, a converted walk-in closet, did not lock, and my brothers took great glee in rearranging its contents whether I was there or not.  It became impossible for me to have any space of my own.  As a result, my mother designated one drawer in the china cabinet to be mine.  She cleared out the napkin rings and place settings that once called it home and told me, “No one will bother your treasures here Denis.”  With that she placed a small skeleton key in my hand and kissed my forehead.

Over the next five years I systematically filled my junk drawer with all of the coolest things I could find.  Initially it was reserved for my Miami Dolphin football cards and G. I. Joe guys, but as I grew older and gained valuable life experience, my collection grew and diversified.  When my neighbor shot a crow with a BB gun and dissected it on his picnic table, I stored one of its severed legs in the drawer.  When we stumbled upon old, water-logged magazines in the woods, a picture of a bikini-ed Vanna White made its way there as well.   I had rock candy for the first time on a field trip and liked it so much that I kept a stick there, taking it out for clandestine licks when no one was looking.  At one time or another my junk drawer was home to money, stamps, condoms, action figures, candy, dead bugs, autographs, etc. . .

As I am now a husband and father of two, I continue to perpetuate this habit, filling storage bins and shelves with things I cannot let go of such as t-shirts, yearbooks and mugs.  It is also why, when Theresa isn’t looking, I discreetly reach into the bag of forsaken toys and place some back in the bin so the girls can play with them another day.  Our post-Thanksgiving purging makes a hypocrite of me every year, but I partake in the ritual for one reason: If I’m not down here protecting our stuff from the scourge of sentimentality, there will be nothing left.

“It’s the natural order of things,” Theresa reminds me as she ties the garbage bag and nudges it towards me for removal.  It’s an easy argument to win when you’re working under the cover of night two stories below our sleeping kids, but when the bag rips in the driveway and its joyful contents spill into open view the discourse weakens.

“Why is my Rainbow Brite surfboard in the trash?” Sydney asks, her face a tearful mask of betrayal.

“What are you going to do with my old piano?” Emily says between sobs.

“And what is Ric Flair doing in there?!” I shout, reaching into the torn bag and shooting her a look.

Theresa, in her desperation, tries to go Grinch on them, reassuring the girls that she’s bringing the toys to be repaired, that they will return in better condition, but they have seen the Christmas special too many times to be fooled.  The tears beating her down, she allows the girls to choose three toys each to be brought back inside and watches with her arms folded across her chest as they tediously decide the fates of the unworthy.

I offer to escort them inside and leave her in the driveway.  Meanwhile, I sneak back into the house and open the closet door, reaching high up into the top shelf and bringing down an old shoe box.  Stopping to make sure no one is behind me, I open it up and place the wrestler inside box, right next to a barren rock candy stick and a tiny shriveled black talon. . .  Some things are just too valuable to let go of.