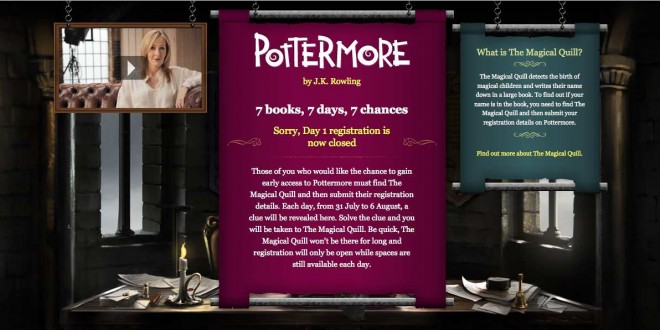 Pottermore early registration: Have you received your user name?

It’s July 31st, and as promised J.K.Rowling’s Pottermore has opened up with a clue and a chance for millions of hopefuls to gain early access to her new website. Unfortunately, for those on a Pacific Time Zone, you’ll have to stay up most of the night to login.

As the clock struck midnight early this morning, users hit refresh until their index fingers were blue, attempting to login to the website and find the Magic Quill. The Magic Quill is a riddle that you need to solve in order to login and receive your user name.

Yet the mysteries of Pottermore aren’t so simple to figure out, as the time that the Magic Quill was to appear wasn’t exactly when users thought it would be. By 1 am PST, it was apparent that there would be no immediate appearance of the Magic Quill. A statement released from several teaser websites indicated that the Quill would not be released at any set time, rather it would appear whenever they put it up there.

7 days, 7 books, 7 chances, so how do you get your chance for early registration on Pottermore?

Remember, only 1 million people can gain early access. After that, registration closes until October. Also keep in mind that of those people who actually get in, many have made more than one user name. This leaves a lot of people out in the cold, unless you want to buy a user name online. Yes, there are people actually selling them. And no, I’m not buying one. October will come soon enough.

Join us as we stalk Pottermore this week, trying to get early access.