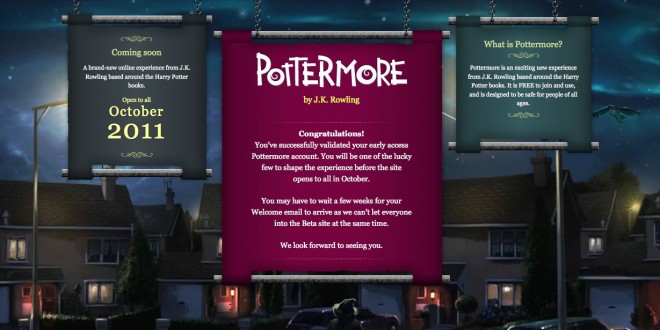 JK Rowling’s Pottermore opens to beta users, but how can you get in?

August 1st, 2011 – Just when you thought that the book on Harry Potter was closed forever, JK Rowling’s Pottermore has opened up to beta testing. What can only be described as an online attraction  for Potter lovers around the world, Pottermore promises to not only let you read the books again, but actually takes you inside them.

Developed by Sony, Pottermore appears to go beyond the online worlds of WebKinz and Buildabear, taking you into a virtual environment that will enhance your book reading experience.  Complete with promised back stories and the ability to walk through scenes, its no wonder that parents around the world are staying up into the wee hours trying to gain access to the site.

Pottermore is open this week for registration, but only one million beta testers will be given access to the website before the planned opening in October. To register, you must answer a riddle that is based on the books.

If your child is dying to get early access to Pottermore, here are 3 tips for getting into Pottermore during the beta testing period:

The number one tip that I can give you about accessing Pottermore? Stay awake.

The most important part of the process of getting is keeping your eyes open. With clues being dropped at no specific set time, you must be glued to your computer until the wee hours, constantly hitting refresh. The first night that the released the clue, it came around 1:40 am PST. The second night, it arrived sometime around 2:30 am. If you want to gain access, set your alarm and wake up every half hour after midnight, checking in and hitting refresh until you are in.

Answer the riddle on Pottermore correctly

If your child knows more about Harry Potter than you do, you might be tempted to wake him or her up to find out the answer to the riddle. You can avoid the bout of crabbiness that is sure to follow by simply Googling the riddle the second you see it. There are a plethora of websites that will be talking about the riddle and the answer all night long, and Google indexes these sites almost instantly. Odds are that the answer will already be published by the time you look for it. Once you know the answer, enter it at the end of this url http://quill.pottermore.com/ . Day two’s answer was 588, so the url would look like this: http://quill.pottermore.com/588

Where’s the Magic Quill on Pottermore? Don’t get confused by the next screen

Once you’ve answered correctly, you will be redirected to a new screen. For me, it was a screen with various photos and videos that you could click on. Having no idea where or what the Quill would look like, I randomly stabbed at the photos. The Quill showed up as a red image. Once I clicked on that, I could gain access to Pottermore registration.

File this one under, “I can’t believe the things I do for my children.” At the very least, once you have gone through the sleepless night to gain access to Pottermore, you can relax knowing you won’t have to do it again.