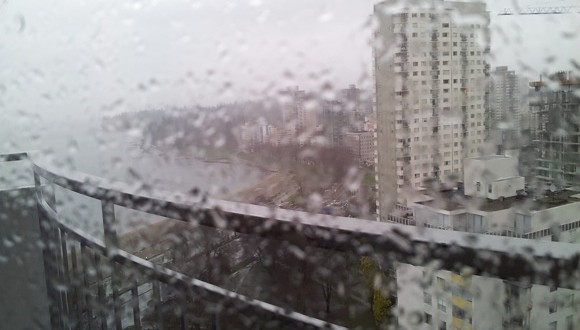 Review of the Philips goLITE Blu Plus Energy Light

Bang for your buck

The Philips goLITE Blu Energy Light gives you a bright blue dose of energy, and is a great tool to beat the winter blues.

Vancouver isn’t exactly the place you might like to end up if you suffer from the winter blues. I grew up in Saskatchewan, land of the endless sky and even more endless cabin fever, and even though it was damn cold outside, I never remember feeling blue in the winter.  Why? I’m guessing because the sun came out. A lot.

The first year I moved to Vancouver, the lack of sun in the winter didn’t bother me. I was busy planning a wedding, moving into a new place, and making friends up at Simon Fraser University where I worked. But as a year passed and I had more time to breath, I began to look around a bit more and I noticed a few things.

For one, it was always raining in Vancouver. Always. I remember bringing an umbrella and thinking it was pointless because the rain would come down sideways and soak you the second you stepped out in it. And SFU, as amazing as it is up there, was a grey concrete maze with little color to liven up the walls and walkways. It was a great place to work, but it was hard to be around all of that grey.

So you have grey in the sky and grey on your walls, and pretty soon you just start feeling blah all the time. That’s the first year Seasonal Affective Disorder (SAD) or the ‘Winter Blues’ got to me.

Fast forward to now. I no longer work at SFU, instead focusing on my own copywriting business. I stay at home and raise my children, and I struggle to find ways to keep them busy when the rain comes. With the exception of 2010 when the Olympics were here, the rain ALWAYS comes around November and it stays for months.

I’ll admit, I’ve struggled hard with living here. It’s beautiful in the summer, but winter seems to set in around the end of October and lasts until March or April. That’s not bad for Canada – it’s just not good for me.

This year, I wanted to try something different. I’ve always entertained the idea of trying a ‘Blue Light.’ I wanted to see if using light 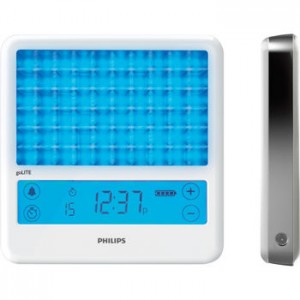 therapy in a rainy climate would help keep me out of the funk I slip into when the clouds roll in, so I went out and picked up a Philips goLite BLU energy light yesterday and I’m going to put it to the test for two weeks.

Out of the box, the goLite BLU energy light is small, compact, and comes with a little carrying case. It has a digital touch screen, so you can adjust the intensity of the light and the duration you’ll have it on. There’s even an alarm so it can wake you up in the morning and a stand to prop it up.

The blue light is actually really bright. It’s supposed to mimic the blue sky you see on sunny days, which in turn will give you energy when you need it.

The recommended dosage is 15 minutes up to 45 minutes per day. I tend to sit and work for longer than that, so turning this thing on at random intervals should be no problem.

I’ve unpacked the goLite BLU energy light, plugged it in, and have been trying to figure out how to set the clock. Of course I could just read the instructions, but…well I never read instructions. I prefer to pioneer my way through these types of things.

After deciding that I have no real desire to set the time anyway, I hit the button and turn it on. At its highest intensity level, it’s really bright, but it’s been a foggy day and I need some sunshine so highest intensity it is.

I’m working while this thing is on, and 15 minutes later it turns off. I had to spend a few minutes blinking until I could clear my eyes, because the room seemed a lot darker after.

10 pm – I decide to do a little light therapy before I go to bed because I’ve been waking up and not being able to get back to sleep lately. It’s almost like a little fireplace in the middle of a dark room.

I’ve set the alarm on the light to come on in the morning, and I’m woken up by the glow. It’s supposed to feel like the sun is rising, but it was such a strong blast that it felt like being in an old hotel with a shiny florescent sign blinking in the window. Sort of how I imagine Kramer felt when he was dealing with the Kenny’s Chicken Sign.

Instead of jumping out of bed like I usually do, I stayed put for 15 minutes and just closed my eyes.

Not going to lie, it’s kind of nice. It’s not warm like sunshine, but when you close your eyes it sort of feels like it.

I’ve sat with the goLite on twice a day for 20 minutes for the past week and then went about my business. I turn it on when I get up at 6:30 and then again before bed.

I’ve noticed a weird thing happening, because in the last few weeks I’ve been pretty ‘nappy,’ and I haven’t been at all this week. Yes, I get a 3 o’clock slump, but I seem to be working my way through it instead of slumping over and snoring in my chair.

The goLite has become one of the things I look forward to every morning. Other things include quiet and coffee.

That little blue light shines like a nice, reassuring beacon every morning when it’s pitch black outside, and I love it for that. But the bottom line is, “Do I feel better despite how cold and gloomy it’s getting out there?’

And the answer is yes. Which I will admit, I really didn’t expect.

I don’t know if the goLite is giving me energy, but it’s the only thing I’ve changed in the past month and I manage to get through the day feeling pretty good.

Time will tell if the goLite is good for getting you through a long winter, but I like to use it and it’s definitely an easy thing to do twice a day.

You can find the goLite online at Costco Canada and Costco USA. If you try it, let me know in the comments if it worked for you.

Update – December 29th, 2013 – After using the Philips goLite on a daily basis for over 2 months, I will go on record and say that it works wonders for my energy levels. This has been the first winter I haven’t felt blah yet, and I always feel blah by this point. I use it for 20 minutes every day, and sometimes in the afternoon if I’m tired.