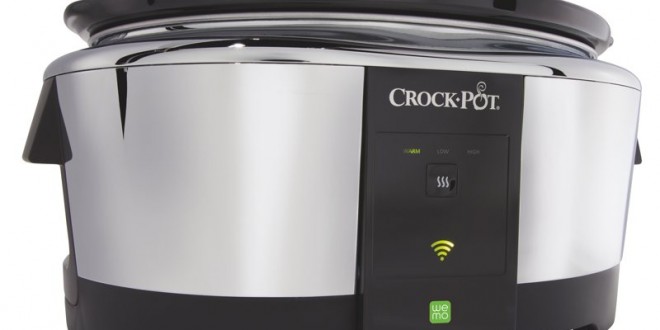 The Consumer Electronic Show (CES 2014) kicked off on January 7th in Vegas this year. For those of us who love tech gadgets, it’s like Christmas is happening all over again.

I was expecting the usual range of bigger, better, brighter TVs and louder headphones, but I wasn’t prepared for the ‘Mom Tech’ gadgets that are lighting up the shelves.

Isn’t it lovely that someone is recognizing there is a growing group of moms and/or parents who want to tech out every single thing they own. Because seriously? We’re the people who want to put these things to work on a practical, daily basis. I use Belkin WeMo switches to make sure my dog isn’t lonely when we aren’t home by flicking on the music and lights for her. My Nest gently turns up the heat while I’m still cozy in bed, and we’ve finally given up on solving the mystery of where garage openers go when they die because we can open and close the garage door via our phones and the Chamberlain MyQ garage door opener.

So let’s check out the coolest offerings from CES 2014 via Belkin and Intel.

A crockpot with WeMo? I’ll admit, at first I struggled as to why I would use something like this. After all, usually you turn your crockpot on in the morning and leave it on all day until you get home from work/school.

Seems pretty simple. But what I had forgotten about is that my crockpot has two settings – Raw and Scorch. If it’s on low all day, the food isn’t edible by 5:00 pm. If I have it on high, well let’s just say that something previously resembling a roast beef comes out.

The Belkin Crock-pot Smart Slow Cooker has temperature/on-off/time settings you can adjust from anywhere via your phone. It will even send you reminders and can calculate the cooking time. If the cooking time is only 6 hours and you’re out for the day, you can get everything ready and hit the button when you want to. For $100? I’ll take it.

The Belkin Crock-pot Smart Slow Cooker should be available in spring 2014. No word on whether it will hit the Canadian market at the same time.

Created by a company called Rest Devices and powered by an Intel chip, the Smart Baby Onsie is a garment your baby wears that has respiratory sensors built in. These green stripes work with a removable, turtle-shaped clip that monitor your baby’s sleeping position, temperature, and activity level. You can check all of this out on your smartphone.

This one could go either way, with some screaming about the potential for harm coming from baby constantly being monitored. From my perspective, anything that helps a parent sleep at night is a good thing. Bringing home a baby can be stressful, if only because you’re constantly worried something may go wrong. Being able to watch your baby’s movements and monitor temperature from your own bed would definitely save those panicked wake ups where your baby has slept through and you’re wondering if her or she is OK.

With the first year comes a high risk of SIDS too. My cousin lost her six week old to SIDS several years ago, and when I asked her if she’d use something like this she said, I quote, “In a heartbeat.”

It’s exciting seeing the new and cool gadgets marketed to parents and those wanting to tech out their home, so I’m looking forward to seeing what else comes out of CES 2014 this year.

After this, my beef stew (thankfully) will never be the same.