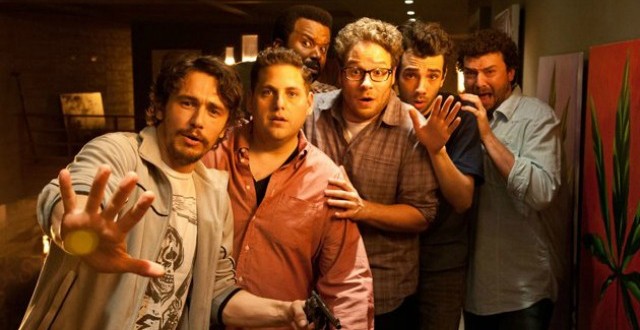 Thanks for the nightmares, Seth Rogan – Review of This is the End

Review of This is the End

Let it be said right now that Seth Rogan can officially be voted as the guy most likely to turn people to religion. For this year at 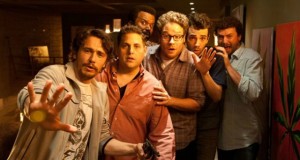 But turn people he will, because even though he may not have intended that with his apocalyptic nightmare “This is the End,” it’s so bloody scary that people just might be going to the movies on a Friday and hitting church on a Sunday.

It starts innocently enough. A flash to Seth’s new offices, where he has a sweet Disney vinyl collection set up. Then, a huge party at James Franco’s house, and it’s pretty much exactly what I’ve always thought young Hollywood would party like – complete with Michael Cera blowing cocaine in McLovin’s face (OK, I didn’t quite picture the Bluth banana guy doing that, but hey, this movie is a surprise a minute).

In horror movies, timing is everything. The worst thing a horror movie can do is lead up to a big shocker, because that kind of takes all the fun out of it. Even though I’d seen the trailers for this movie and knew it took a weird twist, I was NOT prepared for it to twist so rapidly. When it hit, I swear at least 20 people screamed right along with me in the theater.

I found what happens next to be really scary, really shocking, and seriously funny. The movie has just come out and I don’t want to ruin it for anyone by giving a detailed play by play, but I can sum it all up pretty easily by recapping the running commentary of the lady behind me:

My favorite part of “This is the End” is the cast of characters. You know how Frank Sinatra, Dean Martin, and the rest of crew were deemed the Rat Pack? (did you also know that Bogie was the original leader of the Rat Pack. Frank took over when Bogie died). And how Molly Ringwald, Judd Nelson, and Emilio were considered the Brat Pack?

The common theme with all of these ‘packs’ is how well these people work together on the screen. After seeing this movie and almost all of Seth Rogan’s other movies, (with the exception of that one with Barbara. That one seemed like a stinker) Seth and his buddies Jay Barauchel, Jonah Hill, James Franco, and even Craig Robinson seem like a pack to me –I’ll be thinking of them as The Slack Pack from now on, thank you very much. And even though I’m clearly not their demographic, I’ll be buying tickets to other movies with them in it. If they can make the apocalypse funny, they can do a lot of other funny too.

Overall, This is the End does what any good movie does. It makes you laugh, shocks the life out of you, and in the end gives you something to think about. And tonight I’ll be thinking of the Apocalyptic image of the devil that’s clearly been going through Seth Rogan’s mind since he thought up this crazy movie.

Thanks Seth, for the nightmares I’m about to have.