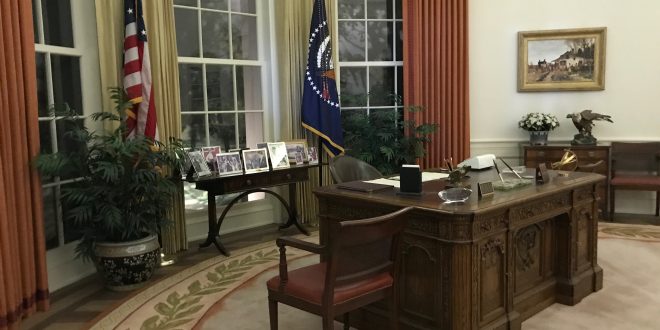 I don’t remember much from when Ronald Reagan was President, but I did recall a few things before I decided to visit the Ronald Reagan Presidential Library with my kids on our latest California road trip. Elementary-school-me thought he was funny, he reminded me of my Grandpa, and that he was possibly the strongest person in the world beyond Superman (who I knew didn’t exist, I just liked to pretend he did).

My road trip policy is to always make space for something educational, and in the past we’ve looked at Saturn from the Griffith Observatory and we’ve explored the tide pools at Laguna Beach. This time I was in the mood for museums, and after hearing about a Titanic exhibit at the museum in August, the Ronald Reagan Presidential Library was my top choice for a visit.

Let me just say upfront I am Canadian and wouldn’t be a Republican even if I wasn’t, but I loved Ronald Reagan. Almost everyone I knew who grew up during his eight years of presidency did, even if you didn’t agree with his policies.

That being said, here’s what I took away from our visit to the Ronald Reagan Presidential Library and why you’ll want to visit too on your next road trip to California. 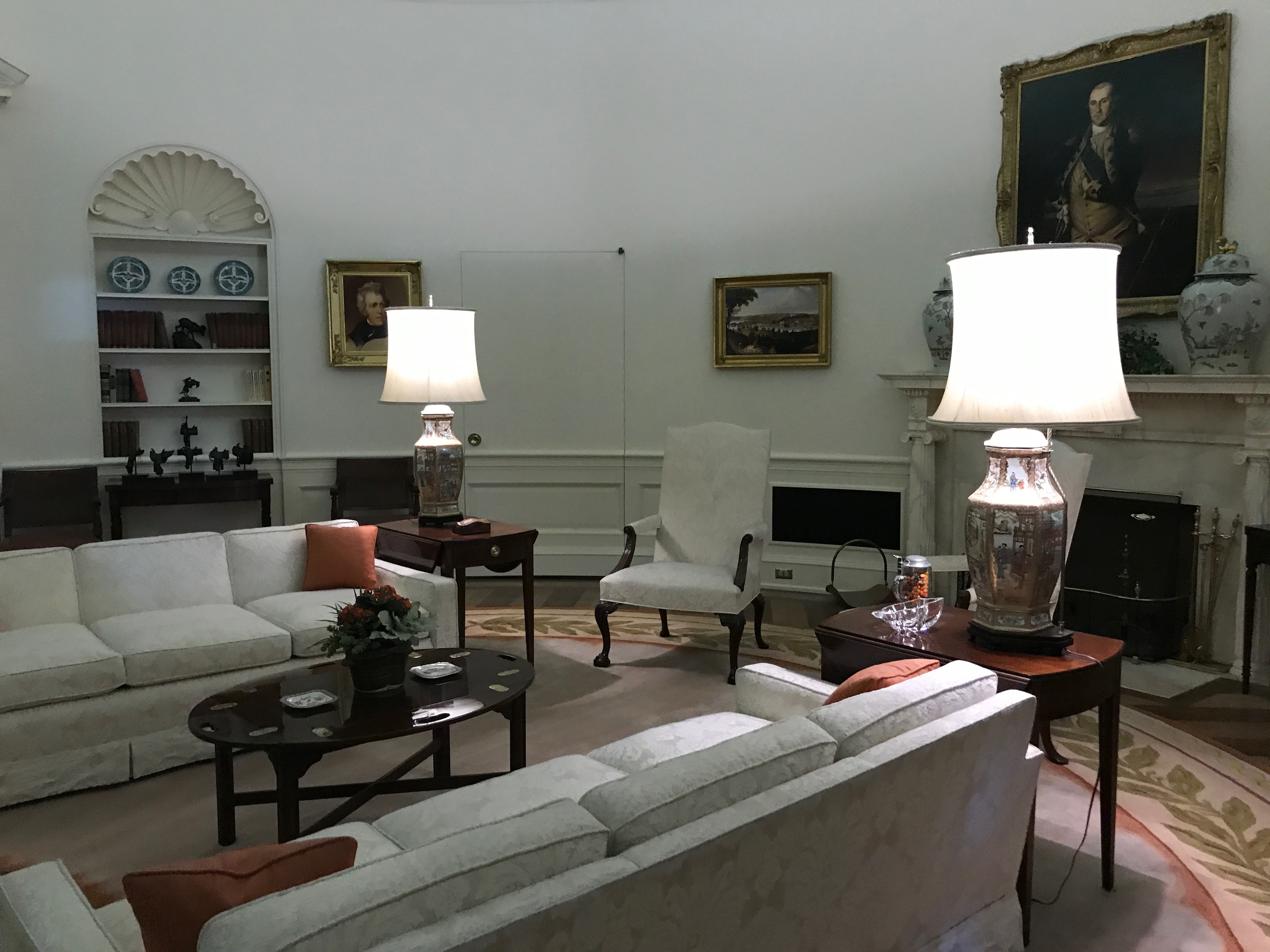 Getting to the Ronald Reagan Presidential Library

If you’ve just drove down the West Coast to California, you’re probably staying in the Anaheim area. And if you’re in the Anaheim area, you’ve got quite the drive to get to the Ronald Reagan Presidential Library. It’s in the Simi Valley at 40 Presidential Dr, Simi Valley, CA 93065 ,and the trip will take you approximately one hour and 15 minutes in good traffic and a lot longer in bad.

Anaheim and the Simi Valley are like night and day. One is congested, packed with tourists, and is populated with palm trees and beautiful greenery, at least in the Disneyland district. The other has wide, clean roads and brown rolling hills, and it’s dotted with signs that warn you not to ever venture off the paths because this is rattle snake country. It’s about as night and day as you can get in California.

Library hours are 10:00 a.m. and 5:00 p.m., and they are only closed on Thanksgiving Day, Christmas Day and New Year’s Day. I’d plan my visit a bit better if I was going to do it again. We went on a Saturday when there was a book signing, and it was pretty crowded.

The museum is set high on a hill overlooking the valley, and on a busy day you’ll end up parking in the overflow parking. You should be able to get a good idea for whether or not it’s a busy day just by looking up the hill. If you see cars lining the streets, you’re best to head to the overflow right away instead of driving up the hill and needing to turn around.

Parking is free, and once at the overflow you’ll be picked up by a shuttle bus that will take you up the mountain. Take a good look at the signs as you’re going up; there will be one for every President before and after Reagan. 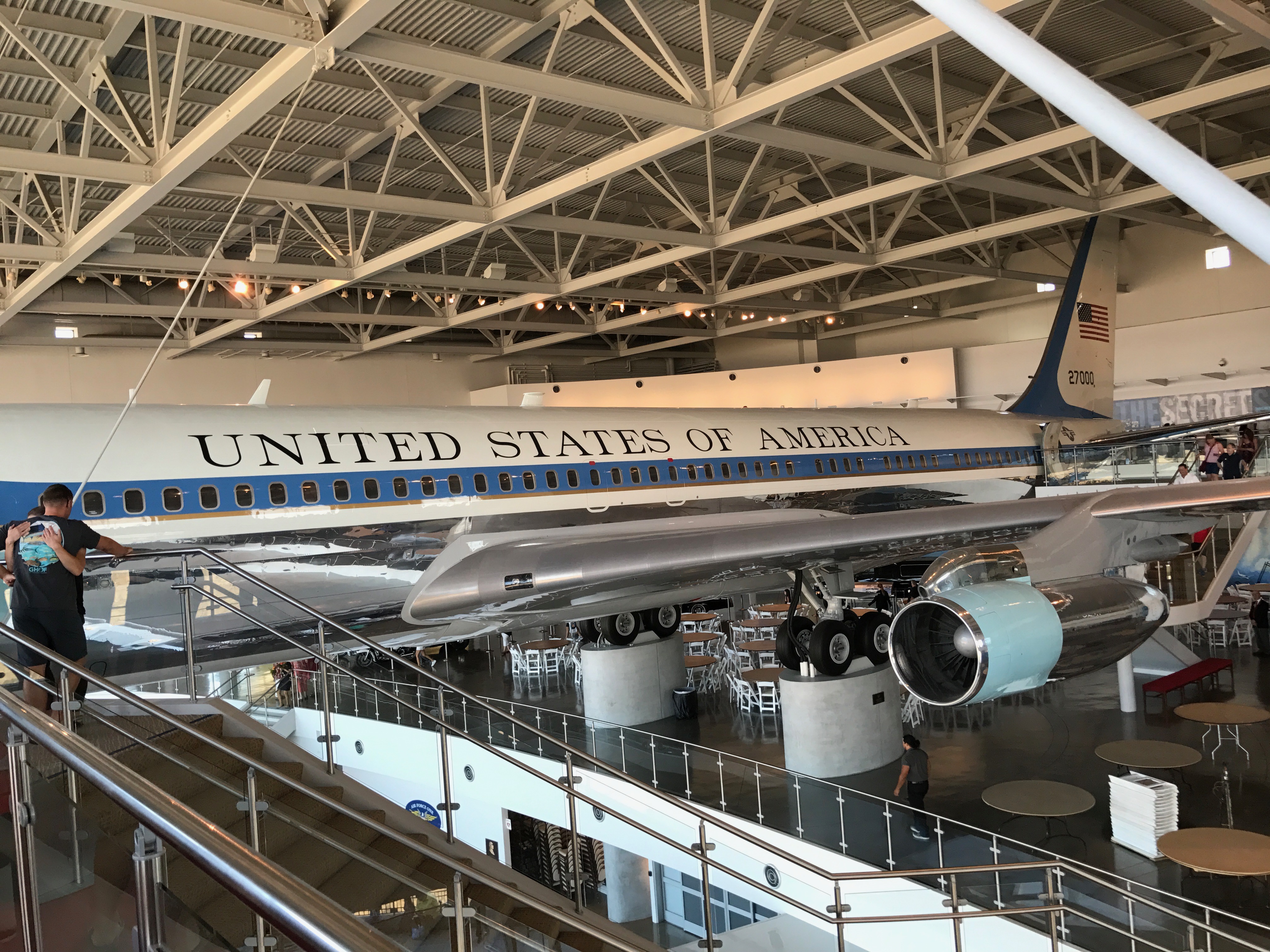 What should you look at first?

My first thought when I got off the shuttle bus was that this place is huge. It was much bigger than I thought it was, and when they give you an estimate that it will take you several hours to go through it, they were serious.

We paid for our tickets ($29.00 per adult, $19.00 for youth age 11 to 17, and $16.00 for age 3 to 10) and made our way into the first gallery as directed by the volunteers. There are a ton of volunteers everywhere, and as you make your way through they’ll talk to you, give you interesting information, or just redirect you when you get lost.

I’d never been in a Presidential Library before so I wasn’t sure what to expect, but the first set of galleries re-affirmed by belief that I was right about Ronnie Reagan. Everyone knows he was an actor first, but it was so interesting to see the highlights of his film career, his old college gear, and mementos from when he grew up.

As you move through the different rooms, you move through Reagan’s life; from his marriage to Nancy to his file of jokes that he kept on hand, he really does become real to you. He was a romantic, someone who loved the outdoors, and, whether you liked his politics or not, a strong example of leadership.

In short, he was exactly what you’d want in a president, and even the kids began asking questions of the volunteers because they legitimately wanted to know more. They also loved the touchscreen board games where they could play a game of Reganonmics (which looked a lot like the game of life), and it kept them entertained until I dragged them away to see the Berlin Wall. 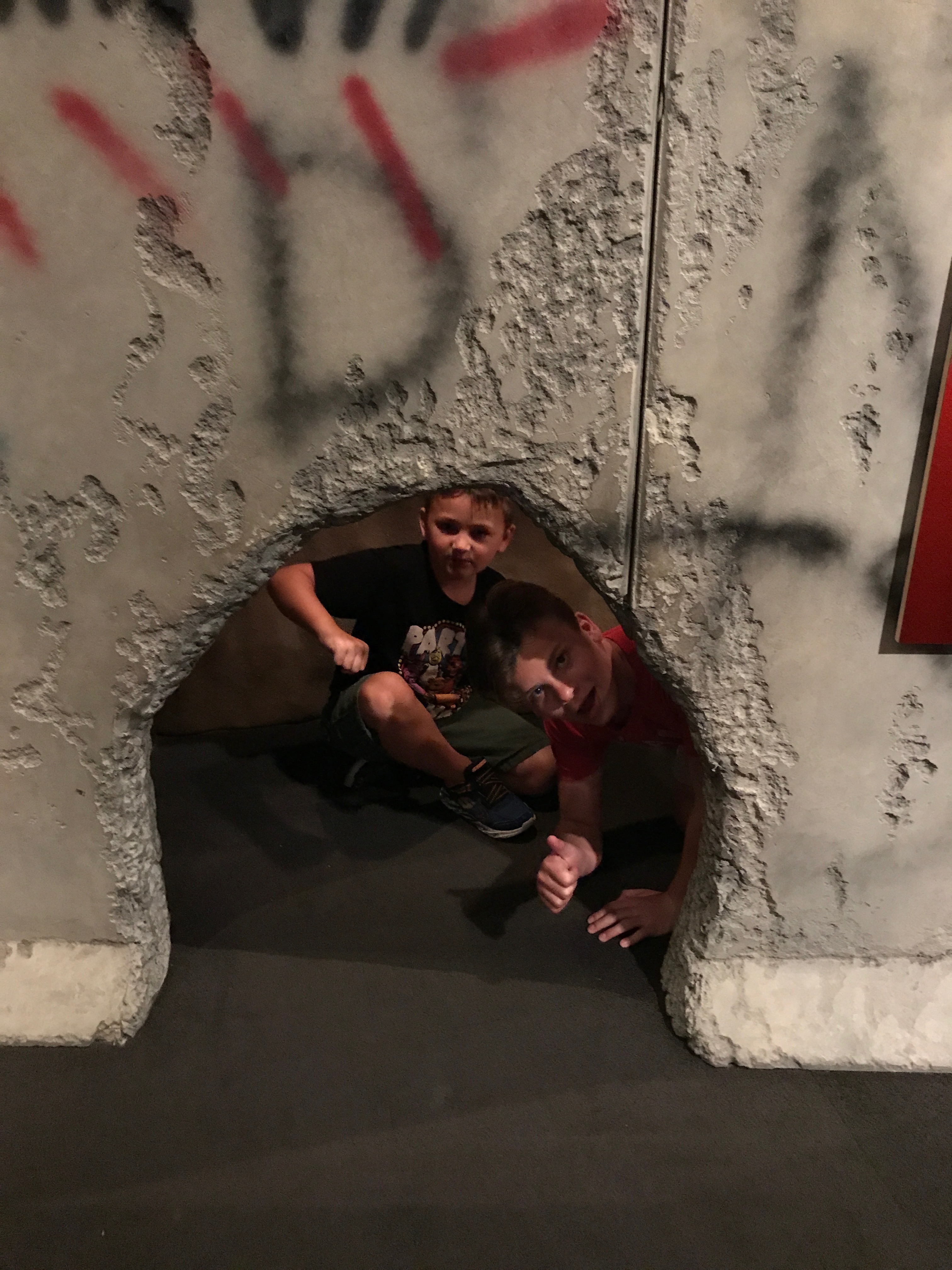 I remember when the Berlin Wall came down on November 9, 1989, and I remember that every single person I went to school with thought at that moment that Ronald Reagan was the most bad-ass President we’d ever heard of. Seeing a piece of the wall in person sort of blew my mind.

There’s so much more to see, including walking on board Air Force One, taking a peek at his helicopter, and having a cold beverage at the Ronald Reagan Irish Pub. If you want to wait to eat, you can also visit the Reagan Country Cafe on your way out to the garden.

I watched Nancy Reagan’s funeral on CNN, and although I had never been to the library at that point, I thought that her final resting place was one of the most peaceful places I’ve seen. That’s why you need to see it for yourself.

Perched overlooking the entire valley, in a tiny nook not far away from the main doors, are the graves of Nancy and Ronnie. Everyone who stood there with us, even if they were taking pictures, spoke in quiet, almost whispered voices. It seemed like the right thing to do. 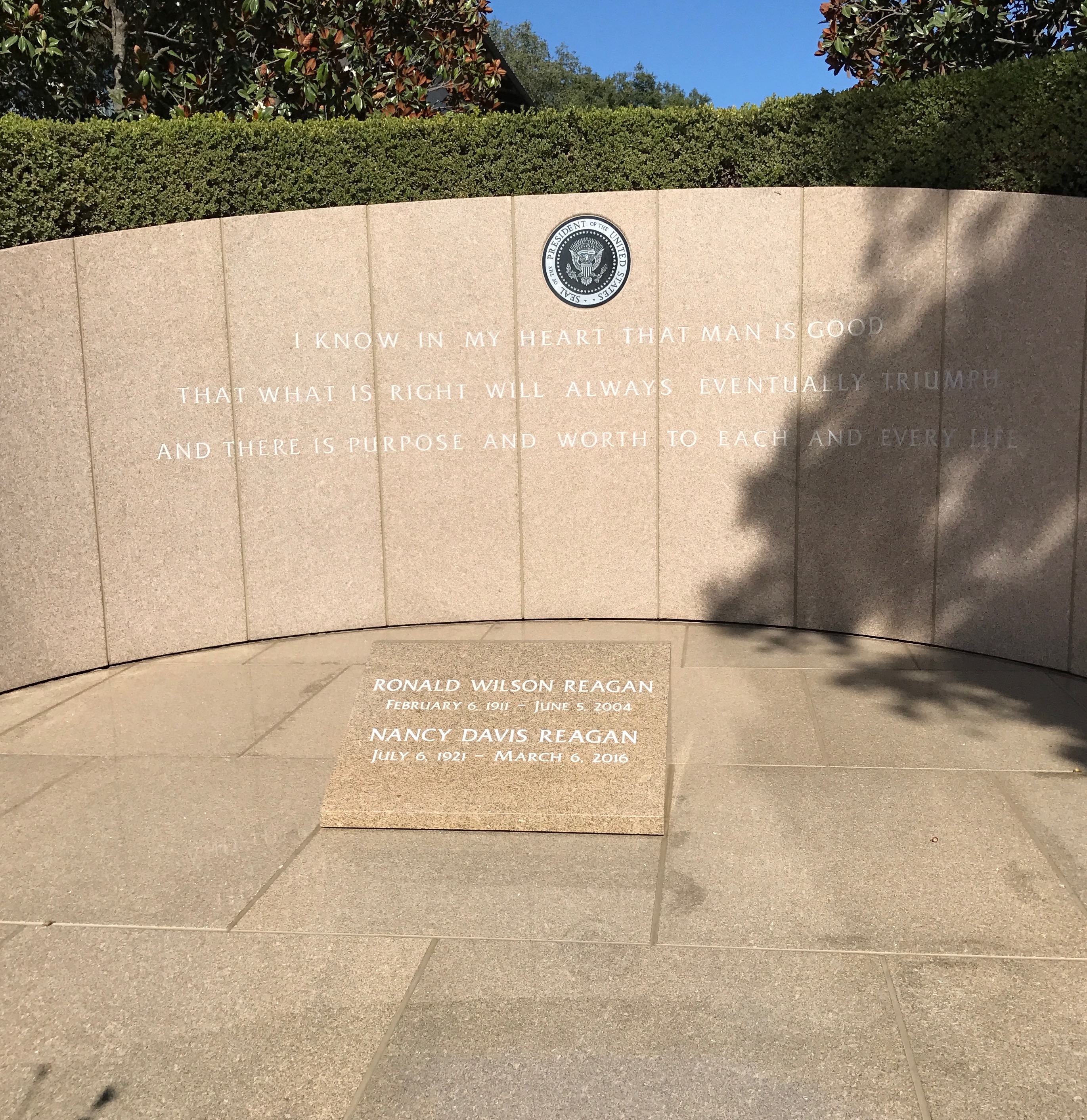 I’m glad our first visit to a presidential library was Ronald Reagan’s library, and I highly recommend it as a venue to take your kids to. My youngest is eight, and although he didn’t enjoy it as much as the older kids did, he still asked a lot of questions after we left.

Just remember: don’t venture off the paths. They weren’t joking about the rattle snakes either.