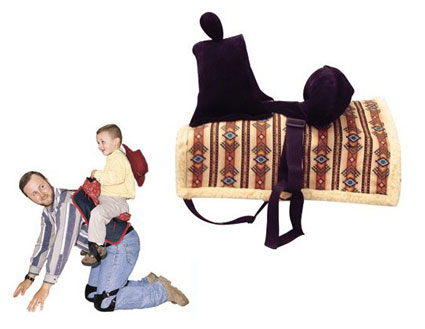 The Daddle, when ride em cowboy isn't quite enough.

I’ve had many, many AH HA moments since I became a mother. Specifically, AH HA moments are those that occur when the old lightbulb goes on in my brain. I had one of these such moments when I started my very first website, and I have had many since that point. The good thing about my brain is that I’ve learned to be wary of the AH HA, because the AH HA is often deluded and will have me wasting my time and/or money in the long run.  That’s why I came across this link on Twitter and laughed myself sick.

Really Ridiculous Parenting Products has been featured on Parenting.com before, and if you are a parent or even know of a parent, you owe it to yourself to head on over there and check it out. The big rubber hands that are supposed to cradle your baby while he/she is sleeping are truly horrendous, but this little gem made me laugh even more. Why? Because I own it! 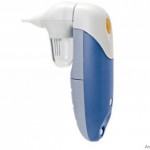 My baby used to wake up at 4 am with his nose all stuffed up. The only option was to drag my sorry self out of bed, squirt saline up his nose, and hope that he sneezes. By the time I had performed all of these procedures (in the dark no less, all the while hopeful that I hadn’t poked him in the eye instead of the nose) he was WIDE awake. Needless to say, I was desperate.

Bébésounds Nasal Clear Battery Operated Nasal Aspirator: Yes, it is battery powered. No, it does not perform as it says it does. It reminds me more of a vibrator than a nasal aspirator. And don’t get me going on the ‘delightful melodies’ it supposedly plays to ease your baby into thinking its OK to jam a huge vibrating machine into their nasal cavity. I’d turn it on, he’d start wailing. If I ever did manage to extract anything, it would collect in the cup attached. My small victory was soured by the thought of cleaning out the holder, not to mention the fact that my daughter started dry heaving in the corner because gross stuff sends her running for her bucket.

Eventually, I ended up giving it to my sister in law, who I believe discretely threw it in the garbage when she obtained the same results.

For even more interesting and ridiculous parenting products, visit Parenting.com