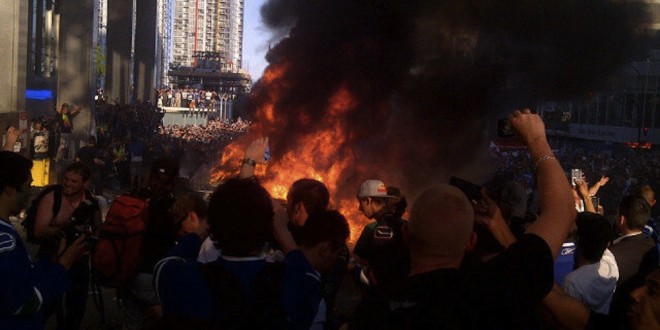 What The? The Playoffs and the Vancouver Riot of 2011

Last night, the Vancouver Canucks lost Game 7 in the Stanley Cup Finals. The run up to this game had been intense, with almost every person wearing a jersey or tshirt and many of the schools with their windows full of Canucks logos that children had painstakingly colored.

They had played hard, but even a die hard fan would have to say that they were overpowered during this last game of the season.

And it was OK that they lost, and many, many of the Vancouver fans would admit to being happy for Boston. When they hoisted the cup, their smiles and happiness warmed the cockles of our hearts.

Suddenly, out of no where, a bunch of morons decided to flip over a car. Not only did they flip it, they burnt a poor teddy bear and jumped on it, then they set that car on fire.

And that is where this story ends really, because there is no happy ending when your city looks like an apocalyptic nightmare. Cars on fire or flipped over, tear gas everywhere, and even people jumping on burning vehicles with a smile on their faces. This isn’t a third world country, this is VANCOUVER. Its hard to believe.And even worse, it is hard to explain.

How did we go from a city behind the team, supporting them, cheering them on, to this? And how do you say to your kids, “Well, some people are just bad.”

Although we can shelter our kids from certain things, if you are from the Vancouver and surrounding area, you might just have to explain the Vancouver Riot of 2011 to your children. If you do, take this opportunity to teach them that sportsmanship has nothing to do with vandalism and take the following into consideration:

We can only be thankful that no one was killed and that children were not hurt during the Vancouver Riots of 2011. It is sad that the stores were looted. It is sad that people were seriously injured. And it is even more upsetting that this riot has given Vancouver, a beautiful city, a black mark on its name. The people of Vancouver, the real people, don’t deserve it. You could see the real spirit of Vancouver during the Olympic games, and you’ll see it again as thousands pledge their time and money to restoring the downtown core to its true beauty.

Don’t judge an entire city based on a group of hooligans who were not hockey fans. Instead, judge the city on how we pull together to repair the damage done by a bunch of idiots.