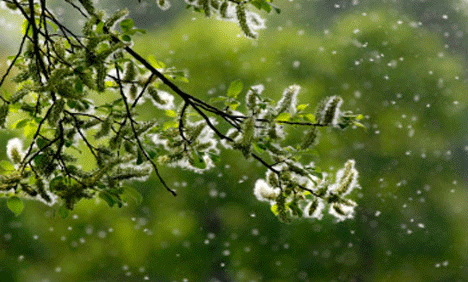 Every spring I look at my cherry tree blossoming and I feel a sick sort of dread. Yes, the trees that bloom here on the West Coast are beautiful, and when their blossoms fall off it rains a shower of pink petals onto the ground that are, in most people’s opinions, absolutely beautiful. And because it’s springtime I want to love the blooming, the flowers poking their heads out, and the pollen flying through the air, but I can’t for one reason and one reason alone – my poor allergy afflicted 11-year-old son.

At the first signs of pollen flying and plants coming to life, my son will start to sniffle. By the time my van is covered in a dusting of yellow pollen, he’ll be having a full-blown allergy crisis that affects every part of his life.

Last year he tried out for track right before pollen season hit and for the first time ever he qualified for the district wide meet. He’s a little guy who always feels like he has something to prove to his taller friends, so this was a huge deal for us. On the day before the event we realized he was probably going to be sidelined. The clumps of pollen floating through the sky were giving him huge, swollen eyes, complete congestion so it was difficult for him to breathe, and tears of frustration because he felt so ill he didn’t even want to go to the track meet. He was even set to be one of the select few who could miss the day at school for it, and let me tell you, there’s nothing this kid loves more than missing a day of school.

So what did we do? He managed to attend because he didn’t want to let his team down, but even his teachers and principal realized how bad he was feeling. She came up to us after and sincerely thanked us for bringing him despite his allergies.

Every year I vow to get on top of his seasonal allergies,and there hasn’t been much I’ve been able to do to help him. I’ll do my 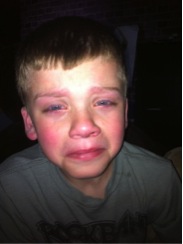 ‘OMGitsallergyseason’ frantic rush to the pharmacy and basically plead with the pharmacist to find him something that will work and help him stay comfortable until the worst of it passes, but even they become stumped when I tell them how many things I’ve tried. Nose sprays, eye drops, and the occasional antihistamines don’t work quite as well for us personally – we need a plan, something he can take throughout the worst of the season when the trees are throwing the big guns at us,the air is full of pollen and his symptoms are hitting him hard.

I recently heard about a new kids allergy product hitting the market, and I’ve became seriously hopeful that this time, this year, would be the year I get a handle on my son’s seasonal allergies. REACTINE® FAST MELT™ Junior Orally Dissolving Tablets are a unique course of action for children’s allergy symptoms. Because they’re non-drowsy, kids can get through a busy school day and not fall asleep on their desks (I’ve heard of this happening, even in elementary school), and they have a fruit burst flavour that makes them so much easier to take than the usual syrup I’ve had to ask my son to choke down.

But best of all? REACTINE ® FAST MELT™ Junior Orally Dissolving Tablets will work fast on the symptoms that bother my son the most – like the itchy, swollen eyes that get so big and puffy it’s difficult for him to see, the stuffed up nose that rivals any cold, and the hives that come when he’s spent a day outside. Spring time = misery for my little guy, and it’s really hard to watch him go through this.

He’s trying out for track again this year and this time we’re prepared – we’re going to try the REACTINE ® FAST MELT™ Junior Dissolving Tablets. He’ll take one in the morning and get relief from allergy symptoms for 24 hours. Maybe this spring we’ll all be able to enjoy the blooming of flowers and trees here on the West Coast.

This post was generously sponsored by the makers of REACTINE ®, but the opinions and images are my own. For more information, visit reactine.ca